Home » GENERA G-H » Helichrysum » Helichrysum candolleanum
Back to Category Overview
Total images in all categories: 11,528
Total number of hits on all images: 6,611,423 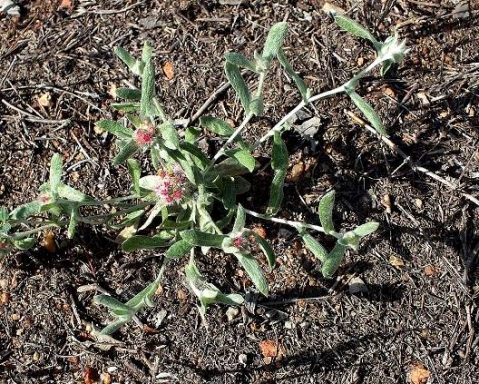 Helichrysum candolleanum, commonly known in Zulu as umaphipha, is a perennial that grows trailing or erect branches from a stout woody taproot to heights around 45 cm.

The stalkless leaves are long and narrow, oblong to oblanceolate with pointed tips. They are covered in grey-woolly hairs. Leaf dimensions are from 10 mm to 35 mm by 1 mm to 8 mm.

The flowers grow in tight, globose heads at stem-tips. They are surrounded by a few woolly leaves usually longer than the head. The involucral bracts are sharply pointed, shiny and silvery white with translucence, slightly taller than the disc. The inner bracts are tipped red or pink, fading to white. The tiny florets of the central disc are yellow. Flowering happens all year round.

The species distribution is in the far northeast of South Africa, in northern KwaZulu-Natal, Mpumalanga, Limpopo, the east of North West and Gauteng where the plants occur on the Magaliesberg; also in Zimbabwe, Mozambique, Namibia and possibly further.

The habitat is bushveld and grassland in sandy soil and disturbed places; in some places it is uncommon, in others a weed. The species is not considered to be threatened in its habitat early in the twenty first century (Pooley, 1998; Van Wyk and Malan, 1997; iNaturalist; http://redlist.sanbi.org).