Home » GENERA H » Helichrysum » Helichrysum argyrophyllum
Back to Category Overview
Total images in all categories: 12,082
Total number of hits on all images: 7,379,629 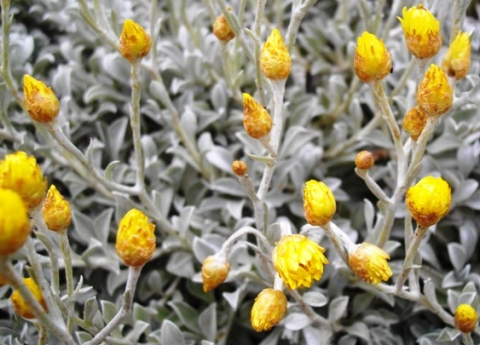 Previous
Image 5 of 99
Next

Helichrysum argyrophyllum, the golden guinea everlasting or vaalsewejaartjie (grey seven yearlet) in Afrikaans has grey leaves, often an indicator of being drought resistant.

The leaf-shape is obovate to somewhat spathulate or spoon-shaped, tapering into the petiole and to the bluntly pointed, often hooked tip. The margins are entire, the leaf folding in along its main axis or obscure midrib. Some call the leaf colour silver or metallic; probably true, but those descriptors indicative of the car sale world inflate the case here.

This is an innocent, modest-looking plant bearing names involving outrageous claims. Everlasting is a seductive appellation, overstating the case of any plant or living entity. Even the suggestion that flowerheads last seven years exaggerates. On the plant a couple of months is more like it, while cut and dried will increase their longevity if properly stored.

In spite of all this the flowerheads are long-lasting as the involucral bracts are dry and straw-like. The dense floret cluster in the centre is deep or dull yellow to dark mustard coloured. The heads attract both pollinators and gardeners, although these visitors behave quite differently. Flowering is abundant, mostly from late summer to around midautumn.

The species distribution is inland in the Eastern Cape and KwaZulu-Natal Drakensberg foothills.

The habitat is dry, open places in rocky grassland at higher elevations. The plants often proliferate on overgrazed, poorly managed veld. The species is not considered to be threatened in its habitat early in the twenty first century.

The plant’s spreading, mat-forming habit provides a low-growing ground-cover in full sun, even on poor, sandy, leached soils. Sandy usually means good drainage. The plant is also frost hardy in its cold winter habitat. Headaches caused by barren slopes in worst parts of rock gardens should not prove too much for this willing grower (www.cradocnursery.com.au; www.plantzafrica.com; http://redlist.sanbi.org).