Home » GENERA H » Helichrysum » Helichrysum acrophilum
Back to Category Overview
Total images in all categories: 11,793
Total number of hits on all images: 6,942,165 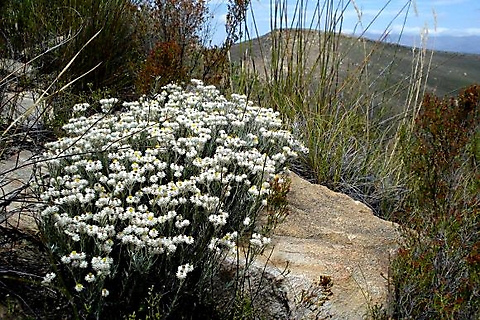 Previous
Image 1 of 99
Next

Helichrysum acrophilum is a single-stemmed, much-branched shrublet reaching heights from 15 cm to 50 cm. Lower branches may spread on the ground.

The species distribution is in the Western Cape and the Eastern Cape from the Cederberg to the Swartberg Mountains, possibly more widely in both provinces.

The habitat is fynbos, succulent Karoo and thicket on rocky slopes in sandy soils, often on higher slopes. The specific name, acrophilum is derived from the Greek words akros meaning at the top and philos meaning loving, referring to this predilection for high places, usually between 900 m and 1900 m.

The species is not considered to be threatened in its habitat early in the twenty first century (Vlok and Schutte-Vlok, 2015; Bond and Goldblatt, 1988; iNaturalist; https://keys.lucidcentral.org; http://redlist.sanbi.org).