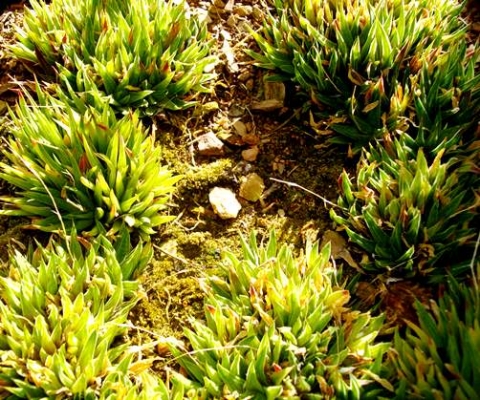 The pale-green leaves are soft and hairless, sometimes with longitudinal white markings, their keels and margins white. Leaf-shape is lanceolate, tapering to acutely pointed tips. The leaves curve outwards at their tips over their keels. The leaf has translucent window areas among some lines, the upper surface slightly concave, the lower one convex. Leaf dimensions are about 6 cm long, 7 mm wide and up to 3 mm thick.

The inflorescence stands about 22 cm tall with a single raceme of 7 cm at its top. About nine spirally arranged flowers in the lax raceme will open not more than two at a time. There are pale green keels on the flower segments. Flowering occurs during autumn.

The distribution in the Western and Eastern Cape is in the Little Karoo and the Baviaanskloof, the plant a South African endemic. It grows on higher rocky slopes in the shade of dry fynbos. The species is not considered to be threatened in its habitat early in the twenty first century (Scott, 1985; http://haworthia-gasteria.blogspot.co.za; www.redlist.sanbi.org).