Home » GENERA G-H » Haworthia » Haworthia wittebergensis
Back to Category Overview
Total images in all categories: 9,572
Total number of hits on all images: 4,302,125 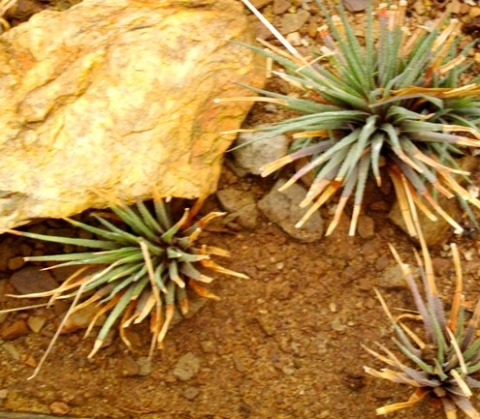 Haworthia wittebergensis is easily distinguished from other Haworthia species by its thin, long leaves. The plant is a stemless leaf succulent growing grey-green to purplish green rosettes, here augmented with pale brown on the leathery leaves. The rosulate arrangement of the few to many slender leaves looks more like a tuft than a rosette, becoming 7 cm tall and 3 cm wide. Because the plants produce offsets gradually, an old one may comprise multiple rosettes in a clump.

The leaf shape is lanceolate, stem-clasping at the base and attenuating to a sharpish apex. That is if the tip hasn’t died back as is typical, also the case with many of the leaves in picture. The upper surface of the leaf is usually flat or shallowly channelled, the lower markedly convex to rounded. Leaf margins are minutely white-toothed; there is also a keel and tubercles arranged in longitudinal rows.

The plant bears about 12 small white flowers spirally arranged in a lax raceme. Green keels are present upon the narrow flower segments that form a tube at the flower base and flare at the mouth. Six stamens (in two whorls of different lengths) are contained in the funnel-shaped tube, formed by the six segments. Flowering happens from midsummer to early autumn.

The distribution of this Western Province endemic is from the Witteberg near Laingsburg for which the species was named, to the Anysberg. The plants often grow in inaccessible places, the habitat quartzitic crevices in dry montane fynbos. The roots are embedded securely where moisture is retained even in the dry season. One usually sees only the broken leaf tips, a natural occurrence, protruding above the stone. Although this plant is rare and sometimes collected, its population is still considered to be stable early in the twenty first century (Scott, 1985; www.redlist.sanbi.org).