Home » HABITAT » Habitat diversity » Tylecodons, different but in cahoots
Back to Category Overview
Total images in all categories: 11,451
Total number of hits on all images: 6,213,941

Tylecodons, different but in cahoots 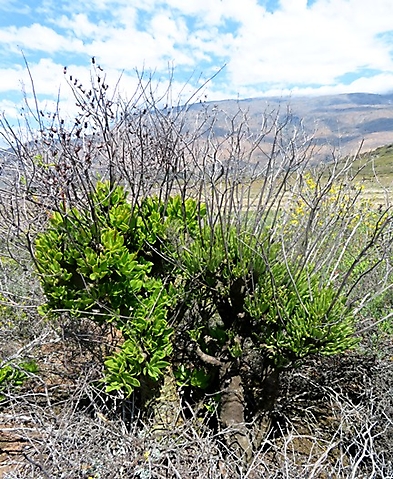 These two tylecodons of different species are spending their lives surveying the Little Karoo countryside in close cohabitation. Their stems indicate years of experience, or one year many times over.

Their leaves tell that this is the growth season of the annual cycle, when summer drought and blooming obligations have not yet ended the growing spell. The photo was taken in October. Flowering has clearly been a big event for both plants last season, not yet kicked in as a priority for the new one.

Tylecodon paniculatus with the yellower, broader leaves has grown these new leaves since winter and will flower crimson-red soon, anytime from late spring to after midsummer. T. wallichii bearing long, narrow leaves, is also winter deciduous, flowering yellow-green during early summer. The flowers often point sideways in the case of the former plant, may dangle more on the latter one.

T. wallichii is sometimes called the pegleg butterbush due to the phyllopodia or leaf bases that persist on the stem, although some, probably older plants have smooth stems.