Home » HABITAT » Habitat diversity » Toktokkie skeleton
Back to Category Overview
Total images in all categories: 11,894
Total number of hits on all images: 7,136,467 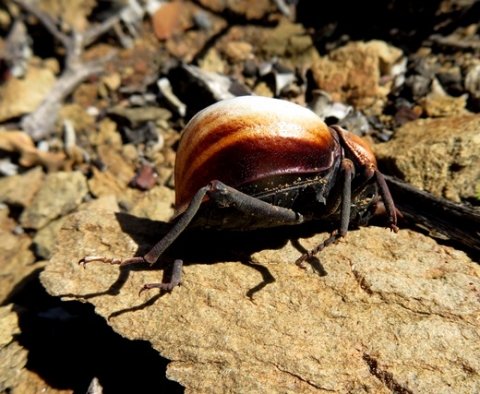 In southern Africa toktokkies, darkling beetles or tapping beetles are well-known to outdoor people. Belonging to the Tenebrionidae family, some of them have quaint attributes. Among those are:

~Their organs for “hearing” or feeling the vibrations of sound waves are positioned in their feet. Toktokkies have been recorded to live for twenty years (in captivity), by which time their feet that cannot regrow have been reduced to short stumps. (Maybe then “deaf”?)

~There is a Namib toktokkie of the Onymacris genus that can run considerable distances at 5,5 km per hour. These Namib toktokkie males would follow a female until she is ready to lay eggs. This pursuit may last for days. More males will join the queue at the back, patiently following the female without jumping queue. When she stops to eat, they all stop. When she walks or runs they take the pace.

~Once they mate, the male on top of the female, he hangs on remaining in position to prevent other males from getting a turn. The female doesn’t seem to mind the weight and maybe appreciates the shade in the hot climate where they live. While this ride lasts the male stays without food. The agony and crime or sacrifice of the jealous husband is widespread.

~Among the large rounded toktokkies like the one in picture belonging to the Psammodes genus, the male has a velvety cushion under its body preventing him from sliding off the female. Connubial facilities come in many shapes and sizes.

~The male of a certain Kalahari toktokkie of the Parastizopus genus has to dig burrows faster than the sand dries out after rain. His potential wife will lift him up when they first meet to check his mass and thereby his substance as a potential husband; too light and he is discarded.

~Then both will collect leaves from their favoured Lebeckia plant at night, bringing it into the burrow for feeding their larvae children. Another less industrious species of toktokkie will enter the burrow, joining the children’s feasting without doing any work. The diligent couple does not object to this, showing signs of a social insect lifestyle. Or maybe unable to discern between children and intruders; they're all eating, aren't they?

~Toktokkies, or at least some of them are believed to navigate using the sun and remembering landmarks.

~Many toktokkie species find their mates by knocking on the ground, hence the common name of toktokkie, an onomatopoeic word.

~The knocking rhythm is species specific, the signals of up to six species in the same area not confused by the recipients of messages, each responding to its own kind only. Some species do this knocking at great speed.

~Both males and females will knock as they approach each other, moving closer by feeling the vibrations in their feet.

~The direction of the vibration is determined by the lag between receiving the signal in different feet.

~Some toktokkies have a keen sense of smell, may even be attracted by the odour of something like a dead grasshopper relished as food.

~There are toktokkie species that repel their enemies by secreting a smelly substance.

~Certain long-legged, diurnal toktokkies are able to change their body elevation, moving close to the sand when it is cold and lifting themselves well up for allowing the breeze on hot days.

~Two-tone toktokkies have a way of body temperature management: White at the back and dark in front, they will move with the black front end facing the sun when it is cold and vice versa with the white back end facing the sun when it is hot, reflecting the heat. Scientific discovery can be quite serendipitous, but effective adaptation happens in nature unaided by theory or schooling.

~The body in picture seen near Oudtshoorn did not move at all and was thought to be dead. Maybe it became discoloured in death or is one of those temperature controlled one-way movers. But maybe not! Some insects survive by acting dead, a reaction triggered by ominous sights or sounds that may include the click of a camera.

~Toktokkie skeletons are external, a protective covering that is a general feature of insects.

~Only few toktokkie species can fly, the majority being wingless and earthbound.

~They vary much in size and the species can be divided between those with diurnal and nocturnal activity patterns respectively.