Home » HABITAT » Habitat diversity » Sundial in the Little Karoo
Back to Category Overview
Total images in all categories: 11,792
Total number of hits on all images: 6,949,128

Sundial in the Little Karoo 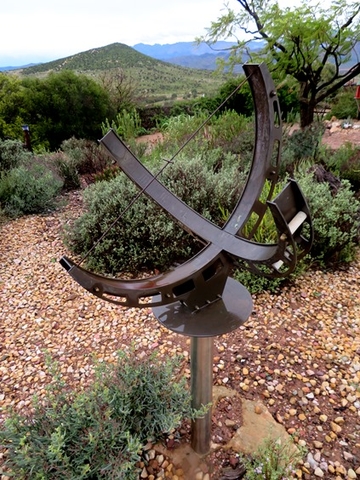 This sundial shows local solar time on the Oulap farm in the Little Karoo when the sun shines. A sundial is a device that uses the altitude of the sun to indicate the time.

Part of the device, its gnomon, casts a shadow upon a dial part marked to track the shadow. This allows a reading of the time at the style or time-telling edge of the gnomon on the dial in accordance with the sun’s position.

Solar time as indicated by a sundial must be corrected throughout the year for the earth’s orbit that isn’t perfectly circular. It must also be corrected for the longitude at which the sundial is positioned relative to the official time of its time zone.

The earliest sundials known are shadow clocks of more than 3500 years ago, designed and used in Babylonia and Egypt. Sundials, ironically, were developed when people still believed that the earth was stationary and the sun moved around it.

There are today many kinds of sundials using the relevant mathematical information for their design, involving horizontal, vertical, declining or multiple dials. Unusual features such as human gnomons are sometimes used, as well as always the geographical position of the device. Designs have proliferated, so there are many more types of sundials today with special features and long names, although electronics have replaced sundials to a large extent in measuring time.

The many ways of measuring time still fascinate people, giving rise worldwide to several horologic and chronometric societies. All life forms, including people are finite in being replaced by new generations of offspring. This makes time of interest to all that lives, although only people measure time. The others all only live in the present and thousands of species are doing just fine.

Everything alive must procreate within its particular timeframe, before it expires, for collectively keeping the organic component of nature going. Life fights much harder and more effectively for creating offspring from all extant species than prolonging the life expectancy of individual living beings.

Life often loses this fight as many more species are extinct from earth than extant upon it. What matters in life’s energetic, continuous quest is that appropriate new features evolve in the newborn of every species for keeping the species going in the forever changing and challenging environment, rather than keeping any particular species alive in the form it has been in the past.

Thus there is a clock ticking (or a silent sundial on sunny days) for the individual living entity and the changes it undergoes over the duration of its life. There is another longer term clock for each species with subdivisions within it for each identifiable form the species takes over time within its overall existence.

The significance of the individual living entity on earth clarified by studying photos taken by the Hubble telescope and now the James Webb one, is matched by information about the number of generations following each other within a living species. Add to that all the species that came before it, resulting in the evolution of any particular species under consideration, as well as those possibly to follow from it when it becomes extinct, in considering how much a breath matters in the bigger scheme of things.