Home » HABITAT » Habitat diversity » Snail on the move
Back to Category Overview
Total images in all categories: 11,416
Total number of hits on all images: 6,192,798

Snail on the move 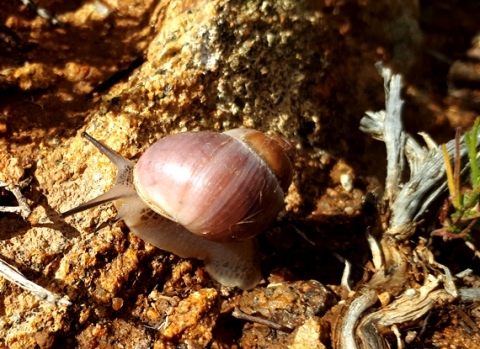 There are numerous snail species on land, in fresh water and the sea in South Africa and worldwide. Some of them are amphibious, and some have shells. Some amphibious snails spend time in fresh water, others in salt water.

Most land snails have a lung and breathe air. Some species have the earlier feature of gills from the old aquatic days.

Many sea or fresh water snails (and some land snails) sport an operculum or hard trap door on the outer surface of its foot, a muscle to close the shell and prevent the soft body from drying out. Most snail species that have a lung lack the trap door.

All land snails are hermaphrodites, meaning that both male and female reproductive parts are present in the same and every snail body. This allows the snail to lay eggs in the ground. The many little snails hatching from diligent reproduction and conducive conditions have tiny shells from the start, if they belong to an armour-plated kind.

These calcium-carbonate shells grow spirally aligned with the gradual expansion of the soft body parts inside. Most land snail shells coil clockwise or right-handed.

As most living plants and animals, snails also serve as food to many animals, both vertebrate and invertebrate, including to people, who are only in extreme pejorative contexts referred to as invertebrate and associated with slime.

Slime on the land snail foot serves to facilitate movement in a sliding motion created by series of muscle contractions. The proverbial snail speed may be sneezed at by faster species, but snail purposes are adequately served by their capacity for motion. Consider their numbers, higher than many people would like to see, but not as bad as those of people themselves.

Shells constitute travel baggage for many land snails, but the protective function must compensate sufficiently for evolution to retain them. A healthy calcium component to diet ensures a strong shell, reinforced by high pH or low acid; a fact to remember by those that want to strengthen their bodily defences.The brown snail shells are (mostly unwelcome) sightings in the back garden, accepted as a natural part of the ecology in open veld.

Also worth remembering is the salting of superfluous snails that draws the moisture from their bodies via osmosis. Salt in garden soil is, however, a different matter, as the same effect can be achieved unintentionally in plants.

A snail on the move displays one or two pairs of tentacles on its head. Add this to shell shape, size and colour as species identifiers, should one be particular about knowing the proper name of the snail to be greeted, exterminated or eaten (Wikipedia).