Home » HABITAT » Habitat diversity » Shelter or early home
Back to Category Overview
Total images in all categories: 12,058
Total number of hits on all images: 7,353,542 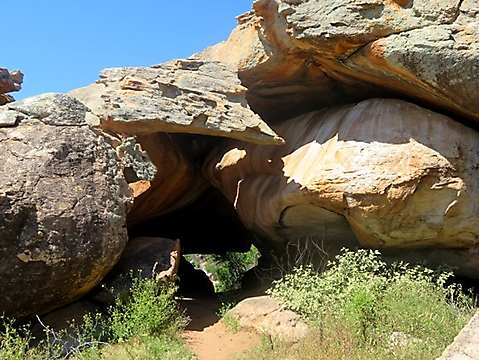 Our forebears took refuge in natural shelter before they were able to improve their early places of residence. Huts, houses and palaces came later, many millions of years later in the lives of the earlier generations of our real ancestors. These real ancestors are the ones who lived long enough to procreate, ensuring that we are here today, able to read this text.

Early animal forms, just like those of today, had to explore the environment between eating and mating for discovering the best nooks and niches where to hide, sleep, relax and live. Energy and time have been and always have to be devoted to awareness, that watchful mode aimed at staying alive, shared by all that breathe. This is true, even when ensconced in the safety of home or castle.

Successful species proliferated, their fittest specimens surviving in larger numbers, passing on their genetic attributes to offspring that followed suit and picked their shelter according to type. Natural diversity allowed the living species collectively to fill up the earth’s range of highly to remotely suitable living spaces, making the most of what at times don't even look like opportunities.

Some animals did not only pick their spots, they built. Birds, spiders and many more built nests before people arrived on earth and learnt to build. Housing options for the earlier human forefathers, initially not looking remotely like people in their succession of evolutionary forms, ranged from the wide-open plains, forests and mountain slopes to literally holes in the ground. All sorts of places had to make do and supported survival, although for long they were no better than lairs, dens and burrows.

Gradual adaptation of the animal domestic scene followed, rising to increasingly desirable forms of shelter, eventually for Homo sapiens culminating in shacks, houses, mansions and palaces. An incompletely known history of the evolutionary chain of ancestral homes, the house-building solutions on earth, lies behind us.

Resourcefulness and victories in untold conflicts allowed our dominant, mostly cruel and unfair ancestral lines to make it in life and become choosier as they pushed other species and weaker compatriots back. They lived what Darwin later conceptualised: The fittest survive!

We are all the descendants of numerous murderers who lived through indescribably lawless times. We rarely choose to imagine those lifestyles today. Order has descended over the ages, always with lamentable exceptions. We flaunt values, ethics and laws protecting rights, beefed up into constitutions. We believe ourselves to be work in progress, not decay and we try, hard sometimes.

The human mind is the unequalled conjurer of the possible, embodying the imagined. Execution usually leaves something to be desired, or much, depending on taste, preference and the mood or the news of the moment.

Early human solutions for the problem of where to sleep are traditionally thought to have involved caves or discovered, natural holes in the ground. Insufficient availability of that ilk of housing must have always been an issue, resolved by force. This impacted on the numbers that survived at different times.

Bear in mind that early humanity (in its range of related hominin species), started off as gatherers and hunters of their food, very similar to the lifestyle options of undomesticated mammals and all other animals in the wild today. Temporary or short-term shelters must have been the order of the day for most, for the earliest folks were forced to move on whenever food or water ran out, or when something else, too dangerous to tackle, moved in. Even when the local toilet area became unbearable they may have moved, due to lacking engineers for cleaning it up. Some human communities still have this problem, but they can't move on for there's nowhere left to go to anymore. Land is owned.

Skill and invention in constructing durable shelter went hand in glove with the transition to early farming, associated with living in the same “house” long enough for the planted crops to ripen. Early building material options would have involved clay or mud, leaves or grass, ice, animal skin, sticks, logs and stone. The building materials of choice were heavily influenced by differential availability in parts of the habitable earth, resulting in a diversity of human skills acquired as resourcefulness increased.

Every tribe was left with unique flukes and riddles to solve, caused by the globe-trotting meanderings of the ancestors. The resultant range of opportunities and shortages for making a living wherever they found themselves on earth, constituted the particular challenge of the tribe, whereas the entire species was also challenged continually in a multitude of ways. The brain and communication skills resulted in method and technique, solidifying in tradition and culture. Lifestyle became identity, rendering the lifestyles of other tribes alien.

Behold, our (almost) perfect world was in place from the earliest days : Build beautiful homes, while demolishing those of mortal enemies on the other side of the hill during our intermittent, habitual wars. For peace is a period of stagnation between two periods of development. Did Heraclitus really say that?

In southern Africa rock paintings show how important caves and convenient spaces among large rocks must have been in providing shelter to the early inhabitants of the land.

What they brought into such places for enhancing their creature comforts has been a favourite field of study in the scientific era. While the body of this knowledge grows, the subjects recede deeper into the past. Techniques and methodologies improve as discovery and invention continue, but the true past is out of reach. This is so in spite of the increased accuracy in reconstructed approximations delivered by science.

The purpose of such studies is partly curiosity, the thirst for knowledge characterising (a proportion) of humanity. The other part of the purpose is the forensic reconstruction of the path we came, how people became what they are now, who we really are.

We need to know this path back to our ancestors for feeding our need for abundant interpretation, the endless stories about ourselves. More and new meanings are continually ascribed to life, particularly human life. We lift our heads and gaze at the stars for figuring it all out, why we are really here.

We get no answers for there aren't any to be seen, but anything up there, or down here for that matter, is bound to grab the imagination of somebody believing a new story must be told, for we are the story-telling species. A truly funny lot we are!

While human knowledge increases almost continually, there is no risk of it climaxing into any kind of comprehensiveness. The focus of development in human society meanders with our stories and our herd-wide whims. The season for every craze or belief system passes, as every wave reaches the shore.

Marble columns were replaced by Gothic steeples, now turned religion museums. The best deserves the best. Our gods must live in the prettiest houses, inevitably crumbling in neglect within a few centuries. Meanwhile more tenement housing is squeezed into less space, decorated on top by satellite dishes, like birthday cakes. These accoutrements are soon forgotten as the new craze smart phones grab the imagination of the masses.

At the same time the super-affluent few go flying for a few minutes in the dark among satellite muck, squeezed into small cabin space, celebrating their superiority.

Those below are satisfied with tiny digital gizmos that fit into their small box houses, watching soapies or the Olympic Games. For small is beautiful and digital is appreciated while people multiply in finite space. We aim for an electronic nano-future in an expanding universe. Until the whatever-comes-next arrives to please us or Covid us.