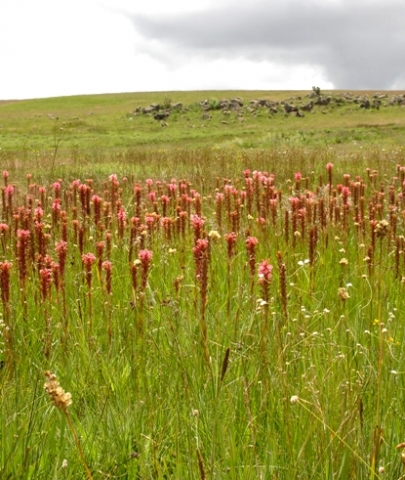 A profusion of pink orchids in the summer grass! It does not only lift the spirit in most that venture here, it ensures discovery of a spirit where one had never been detected before.

These plants don’t die from winter fire. The tubers will perform next summer after heavy grazing, fire or many forms of havoc man and (other) animals may have wreaked on the land since last year. For a long time during the year one does not see them, might forget about them. Many that frequent this place or such places out of season may never know about them. When they bloom their presence is foremost, the event of the moment that will elicit a happy response. Unless you’re a grazer preferring grass.

The plough? Yes! It ruins them. Human activity has removed Satyrium hallackii subsp. ocellatum and many other orchids, many other plants for that matter from their natural homes forever.

Preserving parts of every type of veld is a vital task of “those responsible”. So, feel responsible! Look behind you! Sometimes there is just nobody else close enough to a situation to make a difference. The citizens of the country, the inhabitants of the earth are affected by habitat destruction and affect its continuation. They would spare their offspring the deprivation of lost species if they understand the importance.

A sudden desire to do something about this may miraculously appear in the consciousness of many, because people don't like to be deprived. Feelings of helplessness against the magnitude of the overall problem does not mean helplessness of the concerned citizen in his or her particular situation.

The groundswell of support for just and important causes consists of every contribution, no matter how small. What people protect and sustain define their society, collectively the human species.

Whoever can, should contribute to maintenance of biodiversity. It benefits all. Every species that is lost reduces the living world and its future.