Home » HABITAT » Habitat diversity » Camel sparrow
Back to Category Overview
Total images in all categories: 11,523
Total number of hits on all images: 6,605,153 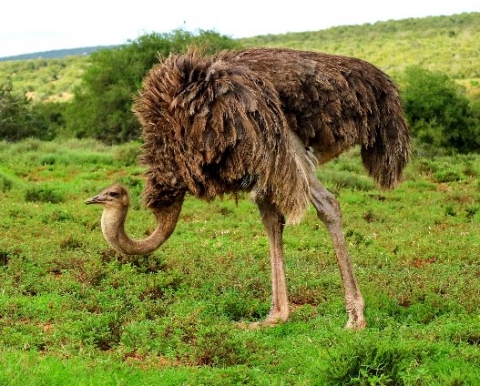 Appearing like a cross between a chicken and a giraffe, the ostrich is both ridiculous and stately when grazing or walking around in observation mode.

An ostrich brain is smaller than its eye, let alone two eyes! But don’t get this wrong, the ostrich eye is one of the largest eyes found in terrestrials.

The eggs are the largest and heaviest laid by currently living birds, but the smallest egg relative to the body weight of the bird laying it. The mass of an ostrich egg may be up to 1,75 kg and its volume up to 1,42 l, equal to about 24 chicken eggs.

The ostrich, fastest runner among the ratites or walking birds that include the rhea, the cassowary, the kiwi and the emu, may reach 60 km per hour, for a short distance. At sprinting speed its stride may be 5 m long. A big male may weigh 156 kg, its height up to 2,7 m. Ostriches also swim and bathe.

In the wild, an ostrich may live for 40 years, although the birds are quite accident prone. Dying of a broken leg from hitting a hole at speed or a broken neck from hitting an unnoticed obstacle happens all too often.

The ancient Greeks called the ostrich a strouthion, meaning big sparrow! And yes, like with so many strange things encountered by people in the past, there have been those somewhere in the Middle East who believed also ostriches to be holy.

But maybe more interesting than old religions these days, the first ostrich feathers were exported from South Africa to Europe in 1826, selling at £2,32 per pound weight.

Scientifically called Struthio camelus, the specific name links the bird to the camel. The reason for this is unclear. Possibilities include: both have two toes on each foot, both fare well in hot and arid conditions and both have thin necks and heavy bodies.