Home » HABITAT » Habitat diversity » Striped mouse under a num-num
Back to Category Overview
Total images in all categories: 11,451
Total number of hits on all images: 6,213,948

Striped mouse under a num-num 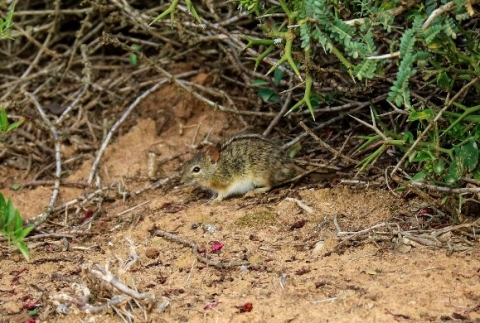 So many kinds of mice in the world! South Africa has 299 mammal species. About 40 percent of them are rodents, including many mice; some common, others rare.

The most widely known mouse today is the computer mouse. It has been described in joking fashion widely, for instance in a poem on vivinfrance.wordpress.com: the “feckless fubsy piece of plastic” that enables people to cope with “wordless Word”. Computer-addicted humanity has a vague reminder of a small warm body from nature when propelling their screen presence via this would-be rodent to “copy, save, delete and stick” their thoughts “at the lightest click”.

Long before the arrival of electronics Robert Burns was once moved by a micro-calamity caused in the world of a field mouse: A farmer’s plough had overturned her nest (“wee-bit housie”) just before winter when “bleak December's winds” ensue.

The human apology that may follow such act (or accident?) is inevitably hollow. Ploughing simply continues, putting more mice and untold other creatures in jeopardy. The words of Burns are, however, significant today as an admission of humanity’s destructive impact upon its fellow beings: “I’m truly sorry Man’s dominion has broken Nature’s social union,” admitting the “ill opinion” of people, violent against the “earth-born companion”.

The poem ends not on the damage done, but on the “guess an' fear” about the future: the early recognition of what is still in store for nature from humans that should really be the smartest protagonists of nature given their brains. But this unheeded message harks back to times long before the Industrial Revolution, Robert Burns having died already in 1796.

So, as Lewis Carroll made his mouse inform Alice in Wonderland about tails: "Mine is a long and a sad tale!" (www.robertburns.org.uk; https://vivinfrance.wordpress.com).