Home » HABITAT » Mountains » On top of Table Mountain
Back to Category Overview
Total images in all categories: 11,544
Total number of hits on all images: 6,625,930

On top of Table Mountain 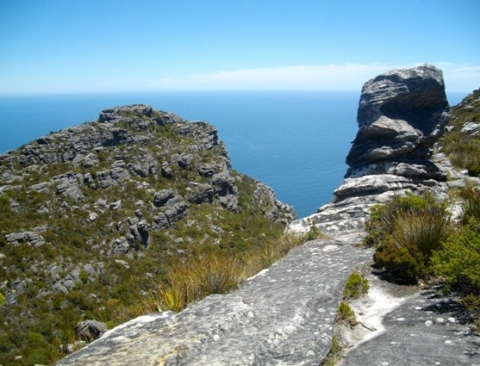 The top of Table Mountain is one of the most visited places of natural beauty in the world. A three kilometre walk (double to return) along the top at altitude 1086 m (at Maclear’s Beacon, the highest point), is not easily forgotten. It serves to introduce the visitor to some of the about 200 notable flower species seen in season, 2200 plant species in all, found on different parts of the famous mountain.

It is not known what the earliest human visitors saw when visiting here. There is the satisfying possibility that much of the unspoiled original beauty may still be present here, in spite of buildings and pathways serving great multitudes of sightseers. Although much waste is cleared away regularly, it takes much thought and work to sustain the mountain in decent, albeit not pristine condition. Nothing less than what a World Heritage Site and a symbol of the Cape Floristic Region deserve.

The majority of visitors, already more than 24 million of them, arrive by cable car, while many hike along one of the several known routes up the mountain. Still others use ropes where rare ascent routes exhilarate the adventurous. A few rare ones of outrageous ilk try something on the far side, routes that have never been conquered before. Because (maybe) they can!