Home » HABITAT » Mountains » Life tests every barrier
Back to Category Overview
Total images in all categories: 10,690
Total number of hits on all images: 5,351,993 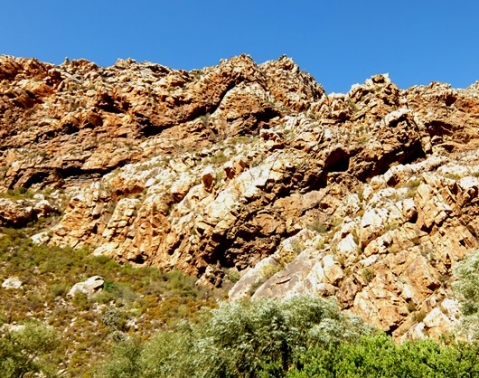 Even where the rocks appear bare from a distance, the mountaineer will tell you that plants and animals do not leave the millions of micro-deserts in the rock alone. Crevices and natural alcoves house the living that do not mind the unusual, or do not favour horizontal perches over vertical ones. The hermit that shuns the madding crowd adapts to scant comfort sure to be avoided by most.

Life in some form or another overcomes challenges posed by every nook of the habitable layer of biosphere around the earth, adapting to what is given there or perishing in the effort. In this way life forms multiply, continually pioneering further into the yet unconquered territories bordering on the parameters of traditional living space.

Where conventional resources reduce in availability or (almost) disappear, adaptation equips the pioneering migrant to do with less of everything, while capitalising on what may be gained from the strange and yet untried. Less nutrient, less uncontaminated moisture, less breathable air, but more of strange soil, weird water and acrid air not fit for living heretofore.

And continually testing more extreme conditions including temperatures: there are micro-organisms on earth coping in boiling water while others live in solid rock. Also these are forever capable of evolving further as long as some of them stay alive.

All that lives share a common drive to multiply in any manner and form, overcoming barriers of every possible kind. This invariable, unanimous effort demonstrates unity in all life forms to this day and in every day to come, irrespective of what happens to any constituent species along the way.

As if life itself is the purpose; the form it takes in all the extant species anywhere in this world merely the current set of survival strategies adopted by life itself. Forget about mankind as the crowning glory of creation.