Home » HABITAT » Mountains » Moraea albicuspa in Drakensberg grassland
Back to Category Overview
Total images in all categories: 10,690
Total number of hits on all images: 5,352,021 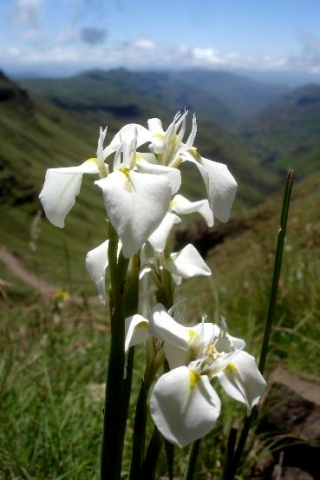 The habitat of Moraea albicuspa in the southern Drakensberg is grassland among rocks, favouring damp spots and the vicinity of watercourses. These mountains, the highest southerly mountains of Africa were formed through volcanic activity in Precambrian times.

High rainfall is generated here, creating conditions among the upper slopes conducive to the growth of deciduous geophytes, such as Moraea, orchids and more. Such plants are capable of hiding during the snowy winters and capitalising on summer thunderstorms for their vigorous short-term growth seasons.

This photo was taken on the KwaZulu-Natal Drakensberg side of the border with Lesotho, in the Mkhomazi Wilderness Area, one of the most inaccessible parts of the region (Wikipedia; www.pacificbulbsociety.org).