Home » HABITAT » Mountains » Maskam Mountain
Back to Category Overview
Total images in all categories: 10,690
Total number of hits on all images: 5,351,807 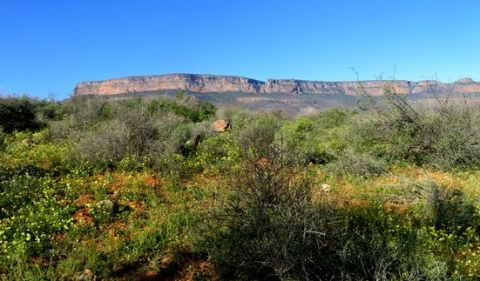 The Maskam Mountain near Vanrhynsdorp forms part of the Matzikamma and Gifberg range. An intermittent stream called the Troe Troe River or Widouw River meanders through the lowland.

Formal farming activities since the 17th century were preceded by San and Khoi light living. People benefited from rich, natural biodiversity that served them directly as, or in the preparation of food, shelter, medicine and tools. Some local rock paintings remain to remind of the lives of these early residents.

Living, even on small town and farm, is no longer as light and sustainable as it used to be in the days of yore. People were fewer, industry minimal and its impact on nature hardly noticed. When it was noticed, it was perceived as achievement, celebrated as progress, the triumph and ingenuity of the number one brainy species.

Since then impact has escalated, exponentially in modern times, introducing risk to the sustainability of the lifestyles of all species. The people who caused all of this, however, also have the ability to respond to challenges.

Such concepts of risk and requirement must only be attained by a sufficient proportion of individuals for countermeasures to start. The skills, technologies and decision-making capacity exist in human society for the proper response.

The question as to whether the signals will be heeded in our time is always there, as some civilisations have succumbed when people were too comfortable or poorly led for their required sacrifices.

Messages of nature conservation, care with poison and plastic, global warming involving chemistry and carbon can be bewildering when first heard. Unfortunately, such communications are mostly driven by city people who lack track record in personal lifestyle for pontificating to small, rural communities. The idea of one finite earth as the only home for all remains powerful, however, wherever attained.