Home » HABITAT » Mountains » Lichen art
Back to Category Overview
Total images in all categories: 11,792
Total number of hits on all images: 6,949,206 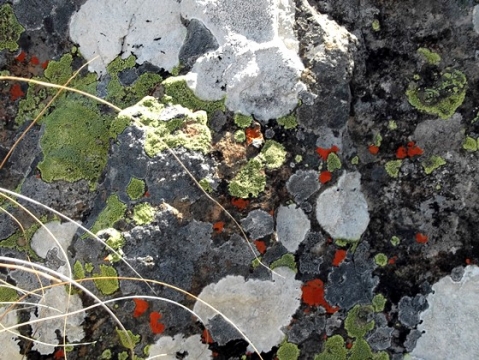 Rock-faces in grey Karoo vegetation may be as colourful as this from coverings of lichen.

Lichens occur in widely variable environmental conditions from sea level to mountains at high elevations. Found on almost any surface, they grow on natural surfaces such as rock, plant stems, exposed soil and inside the upper soil crust. Man-made options will suffice: They appear on walls, gravestones and roofs.

A host plant only serves as a substratum; no parasitic intrusion is made by the lichen. While rootless, lichens still absorb water and nutrients as plants do and produce their own food through photosynthesis.

Different kinds of lichen have adapted to extreme environments, from arctic tundra, hot and dry deserts, rocky coasts and toxic slag heaps. They can even grow inside solid rock, living between the grains.

It is estimated that 6 percent of the earth's land surface is covered by about 20,000 known species of lichens (Wikipedia).