Home » HABITAT » Mountains » Kumara plicatilis safest on rock
Back to Category Overview
Total images in all categories: 11,793
Total number of hits on all images: 6,942,079 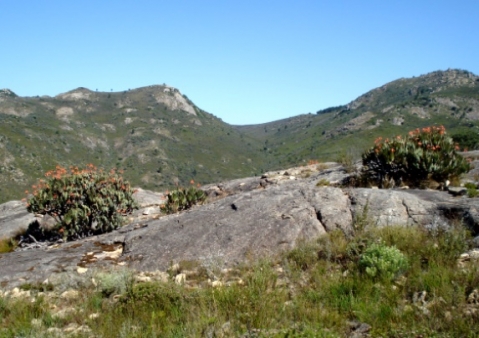 Kumara plicatilis grows in rocky places of Western Cape mountains where fires do not easily reach and destroy. Areas dominated by extensive sheets of rock or other rocky outcrops rule out much of agriculture and forestry, safeguarding the habitat of these plants to some extent.

Some foreign invader plants, however, tend to overcome this obstacle in the distribution range of the species, constituting a possible future threat. For now, the plants in picture thrive in their crevices, suggesting long roots that spread far along the underground rock surfaces to find food and moisture for such large plant bodies (Reynolds, 1974; Van Wyk and Smith, 2003; Jeppe, 1969; www.redlist.sanbi.org).