Home » HABITAT » Mountains » Heterolepis aliena in hanging garden style
Back to Category Overview
Total images in all categories: 11,018
Total number of hits on all images: 5,653,310 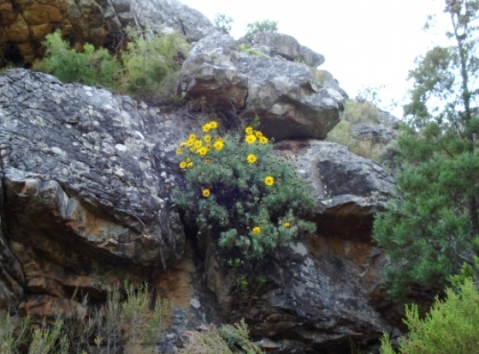 Growing from a crevice on a steep sandstone slope is no problem for Heterolepis aliena. The plant hasn’t earned the common name of rock daisy for nothing.

The specific name, aliena, suggests that the plant is a stranger. This might be taken to mean retiring into aloofness, supported by the plant’s common positioning among rocks. There’s probably a more mundane explanation for such a name. In fact, the typical position of this plant in habitat may be a survival feature; just the place for avoiding damage caused by itinerant browsers and hooligans, or even the occasional passing veld fire.