Home » HABITAT » Mountains » Hebron, Piketberg
Back to Category Overview
Total images in all categories: 11,662
Total number of hits on all images: 6,774,633 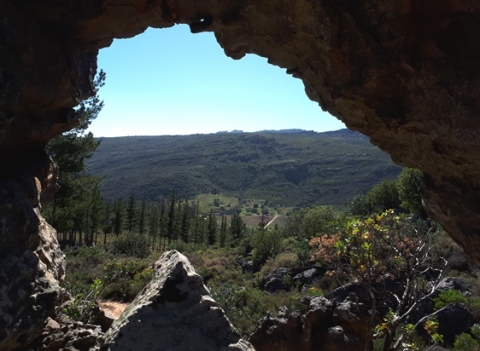 Caves are often associated with mountains, not always. People in dire need have excavated caves where no mountains were near. A cave or cavern is a natural underground space large enough for a human to enter. There is a list of South African caves of note in Wikipedia.

Smaller caves, shallow ones or rock overhangs are known locally, still used as shelters by those venturing nearer to nature. One tends to remember the cold or rainy nights spent in rock shelters, may even be tempted to visit there again.

Cave homes have at times and in places been made comfortable; all conceivable features added by those fired up by the idea. For what is a cave without a fire?

The man can be removed from the cave, the cave not always from the man. The archetypical safe haunt, primal as the womb, lingers in depths of the mind where consciousness disappears into its roots.

Archetypical caves forgotten in nooks of the mind are elusive by daylight, bold in the dark. Dream visits happen unexpectedly, when up to forty thieves may be met during any of a thousand and one nights.