Home » HABITAT » Mountains » Gifberg cliffs
Back to Category Overview
Total images in all categories: 10,690
Total number of hits on all images: 5,351,896 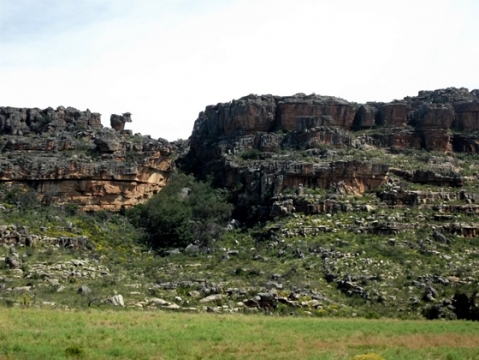 The Gifberg Plateau south of Vanrhynsdorp is rich in succulents and geophytes growing among the arid fynbos generally found here. The mountain is named after the gifboom, Hyaenanche globosa. (Information and pictures of the tree are presented elsewhere on this Site, accessed via the Search Box.)

Several crassulas and interesting Aizoaceae or vygie family members, including some Conophytum and Lampranthus species make a living among the flat and angular sandstone rocks. Many plants have settled for dwarf status, adapted to living frugally in the low winter rainfall and hot dry summer conditions. Modern rooibos tea farming and ancient San rock art are memorable features of the region.

The mountain streams, some seasonal, add diversity to the vegetation. Many plant, animal and insect life forms meet the challenges presented on this land.

The Matsikamma Mountains just east of the Gifberg were given their name by long gone indigenous residents. This name means that the mountains yield water, information of significance in this often thirsty part of the world (Van Jaarsveld, et al, 2006).