Home » HABITAT » Mountains » Euphorbia mammillaris in exclusive, high society
Back to Category Overview
Total images in all categories: 11,523
Total number of hits on all images: 6,599,420 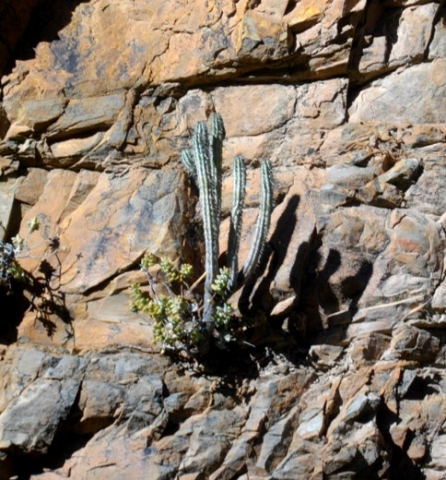 This Euphorbia mammillaris and its Crassula rupestris life partner are positioned high on their superior cliff face. They have come to be here through a series of micro-historical events unimportant to the species, vital to the specimen.

The uniqueness of the individual effort, amidst a complex interplay of many forces and influences, forms a tiny part of what nature does all the time. The miracle of living plants lies in the sequences of events that keep on recurring in accordance with the full set of laws of nature without missing a beat.

Favourable factors for these two plants include unimpaired sunlight for part of the day and being relatively safe from destruction by human or animal. The view, not an issue for a plant, would have more value for a human than any of the other amenities involved in being situated thus. Think of the cave dwellings in Turkey.

There are too many houses built on the brows of the prettiest high hills everywhere. To be noticed up there as conspicuous consumption of the haves is a widely cherished dream among some people, many hills destroyed to catch the dream. The heavenly view may be appreciated, by some only for a while or not at all, especially if one knows no other. Remember love's sad satiety spoken of by Shelley?

Privileged exclusivity is not for the masses. They are kept far away, preferably out of sight, making the haves of the world unpopular in their growing numbers, but falling proportion. The largesse of the rich, out of reach of the majority is reduced to individual power and capacity in the animal and plant kingdoms; dynasties are only kept in place by every successive generation of lion or bull proving itself afresh aguinst its competition. A stand of trees the same: those around when nature allows something else to happen or enter the stage will compete and win or lose.

Retaining some remaining hills as pristine nature for all to enjoy and not for sale to the privileged, is requisite value system kit for city fathers of today and tomorrow. This could only to be achieved if people also decided to start limiting their own population numbers growth... a decision nowhere in sight.

The resilience of succulent plants that bloom and seed in the most demanding conditions is well-known. Mixing it with massed vegetation down below in deep soil where the going is easy, makes a species more secure. Surviving up here where every cycle of seasons includes battles at the edge of the possible is something, shows character.

Every successful individual effort increases the probability of survival of its tribe by a tiny aount; prolonging the series of successes in all contingencies of living conditions faced. Nature is a living monument to the innumerable deaths of times past and a memorial to the unknown plant, animal and insect.