Home » HABITAT » Mountains » Disa ferruginea
Back to Category Overview
Total images in all categories: 11,921
Total number of hits on all images: 7,168,724 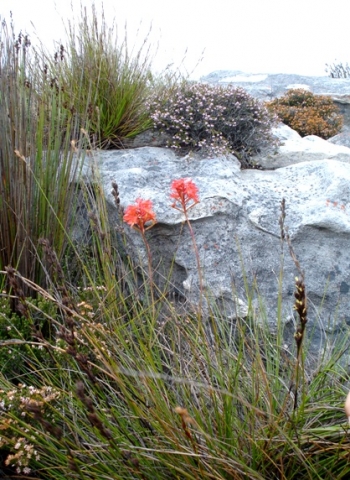 Disa ferruginea is found on fynbos-covered mountain slopes of the southwestern Cape.

It grows here with another (non-orchid) plant, Tritoniopsis triticea that bears flowers superficially similar in appearance to its own. The two species bloom concurrently and T. triticea produces nectar, while D. ferruginea doesn’t.

A particular butterfly of the Aeropetes genus, living among them, is duped by the resemblance, so it visits and pollinates the flowers of both. The butterflies survive on what they receive at the Tritonia (and possibly other species) stops, nothing from the D. ferruginea flowers.

Their unprofitable work is written off as charitable, good citizenship contributions in the interests of biodiversity, which none of the participants involved knows anything about, of course. It all works out though; the participants have all survived doing this for a very long time.

Should the butterflies mutate to higher IQ levels, however, and discover how they are cheated, D. ferruginea will be on its own in a sudden survival quest. It might then evolve nectar production, which would be used by some pollinator(s) without a cloud of scandal or suspicion.

Or it might “invent” a unique alternative solution, even something brand new in nature, by capitalising on individual differences, mutations and the innumerable deaths over many generations while sustaining vigorous effort. (What other kind of effort does nature ever knows about anyway?)

One lucky break would make all the unsuccessful experiments worthwhile to the species, which is the entity focused on for survival in all the effort all along, never the individual specimen.

Such a success story free from subterfuge, if ever found, might appeal to people: a socially equitable, ostensibly harmonious arrangement, even ethical or "constitutional"!

But nature knows no civil rights, only viable outcomes for those species fit enough to overcome every challenge along the way… until it doesn’t (Liltved and Johnson, 2012; Bean and Johns, 2005).