Home » HABITAT » Habitat diversity » Mosses in the Little Karoo
Back to Category Overview
Total images in all categories: 12,091
Total number of hits on all images: 7,393,122

Mosses in the Little Karoo 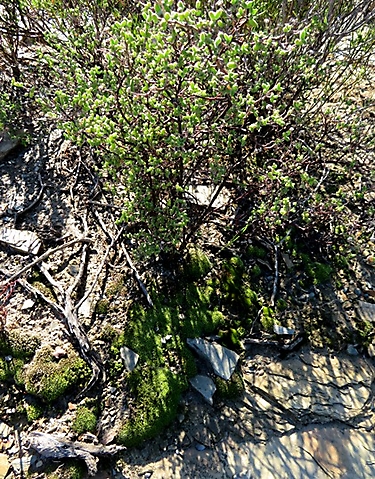 Mosses, often associated with shaded, cool and moist places like wooded ravines are also found under shrubs and trees far from water, even on thatched roofs. This photo taken on the Minwater farm near Oudtshoorn shows how the soft green patches where fairies might dance under the full moon, revive after rain on southern slopes.

The green cushions comprise thousands of individual plants lacking roots. A moss leaf is only one cell thick. Mosses are small, non-vascular plants that do not flower, comparatively primitive organisms that don’t form firm supportive tissues and therefore remaining short. They form part of the Bryophyta taxonomic division, which also includes liverworts and hornworts.

Mosses have leafy stems, little bodies surrounded by minute leaves at the stem-tops. Egg-cell pockets or archegonia receive sperm-cells that come swimming in. The zygotes resulting from the fertilisation are retained in the archegonia, undergoing a mitotic type of cell division.

The zygotes send up stalks tipped with small capsules, some hooded. These capsules fill up with spores that escape through the teeth of small mouths that open sporadically when wet. When moist the spores send out thread-like plant growths, resembling algae. The leafy moss stems grow from these threads.

The cycle includes two plant development stages, first a haploid gametophyte and then a diploid sporophyte that coexist and follow each other in alternation of generations, the subsequent plant generations alternating between diploid and haploid organisms.

These complications don’t interfere with the dancing of the fairies (Capon, 2005; Stoneman, 1928; Wikipedia).