Home » HABITAT » Habitat diversity » Mfezi, the Mozambique spitting cobra
Back to Category Overview
Total images in all categories: 12,091
Total number of hits on all images: 7,393,250 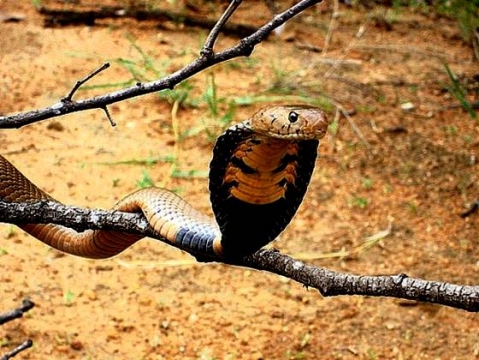 Meet the Mozambique spitting cobra, often called mfezi! The Zulu word for snake is mfezi, while in Shangaan this species is called m'fezi.

Scientifically this snake is called Naja mossambica, but don’t wait to call it names. Retire to a safe distance forthwith. And don’t endanger the magnificent animal where at all possible in the process of protecting people including yourself.

Common in Africa, this spitting cobra occurs only in the northeast of South Africa, from Durban to the Lowveld and possibly as far west as Gauteng. Its haunts in lowland forest and moist savanna include termite mounds, holes dug by animals, hollow logs and cavities among rocks, often near water. Mature mfezis are more active at night, while the juveniles use daylight more.

A relatively small snake among the cobras, it seldom exceeds 1,5 m in length, usually shorter. The colour on the back is slate grey, bluish to olive brown with a dark edge on the scales or some scales. Below it is yellowish or salmon pink with black crossbars and blotches on the throat, sometimes connected in a continuous band.

The mfezi lives for about twenty years in captivity, in nature preyed upon mainly by other snakes.

While it may spread its hood in communicating aggression, this snake seldom stands its ground. If not retreating, it may play dead or spit, i.e. spray its venom in the direction of the enemy, similar to the rinkhals. It does not have to spread its hood before spitting and it may spit from a concealed position.

Mfezi fangs have openings before their tips through which venom can be forcefully projected straight forward over distances of 2 m to 3 m. The snakes have ample quantities of venom that is particularly dangerous to the eyes of the recipient. Depending on the situation the mfezi finds itself in, it can and will bite, its venom comparable to that of the North American Mojave rattlesnake, serious stuff!

An oviparous species, the mfezi lays 10 to 22 eggs that hatch after two months. The hatched snakes are about 24 cm long, independent from birth.

And look carefully, these kinds of snakes never spread rumours about the nutritional value of apples (Wikipedia; https://snake-facts.weebly.com).