Home » HABITAT » Habitat diversity » Liverwort or lichen?
Back to Category Overview
Total images in all categories: 11,933
Total number of hits on all images: 7,175,134 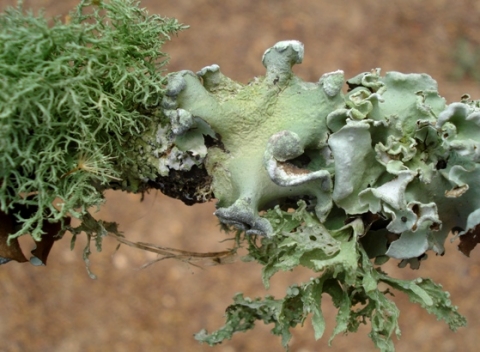 This delightfully diverse growth found on a branch in the Caledon Wildflower Garden in November may be lichen or possibly liverwort. There are different forms of both.

This Site is mainly about flowering plants, but as their fortune and conservation are inextricably linked with nature conservation at large and even all life on earth being threatened, little sorties into the wider world and exploring other life forms and relevant issues are appropriate.

Conservation minded citizens of planet earth exist anywhere and everywhere, hopefully on increasing scale. Every citizen is a layman in most matters, skilled to a recognised level or expert in one or a few. It will take more people than a narrow grouping of experts to solve the twenty first century's problems. So, we look at more living things than plants, although expertise is limited, sometimes only triggering issues for further exploration by others to "take things further" in particular fields. So lichens and liverworts feature for introduction, albeit to a lesser extent as the flowers.

Lichens appear as leaf-like types that are flat and creeping in a variety of colours or erect cup-shapes, shrubby ones attached to stone or plant in a single point, erect or pendulous, as well as flat surface crusts clearly delineated on rock or tree and increasing the area covered year by year.

Some common liverworts have a thallus, a flat or curly plant body that is not differentiated into stem, leaves, roots and vascular system. Thalli also occur in algae, fungi, lichens.

Most of the about 9000 liverworts on earth are not thallose (having a thallus), but are  leafy like flattened mosses. Liverwort leaves may have marginal cilia, deeply lobed or segmented, the leaves arranged in three ranks or a clearly differentiated stem may be absent.

The name liverwort exists from ancient times when it was believed that these plants contributed to the healing of liver diseases. Names can outlive context or significance (iNaturalist; Wikipedia).