Home » HABITAT » Habitat diversity » Koue Bokkeveld
Back to Category Overview
Total images in all categories: 11,632
Total number of hits on all images: 6,749,721 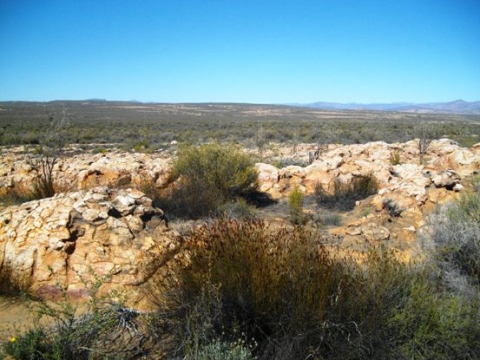 The Koue Bokkeveld, Afrikaans for cold buck shrubland, is a montane region interspersed with rocky valleys and undulating plains in the inland west of the Western Province. The land lies from the mountains near Prince Alfred Hamlet north of Ceres to the vicinity of Citrusdal.

Winter snow often caps the peaks that average at 1600 m in this region of generally cold winters. Run-off drains into the Olifants River catchment area. Geologically this land is partly Cederberg sandstone and Bokkeveld shale, the soils partly acidic clay and loam or silty and sandy.

Vegetation types include renosterveld, dry shale fynbos and higher elevation mountain fynbos as important components, well worth visiting. The rocky, rugged terrain has a resilience that benefits the persistence of many of its indigenous plant species (Dean, 2005; www.gnec.co.za).