Home » HABITAT » Near or in fresh water » Lowveld flood
Back to Category Overview
Total images in all categories: 12,068
Total number of hits on all images: 7,363,295 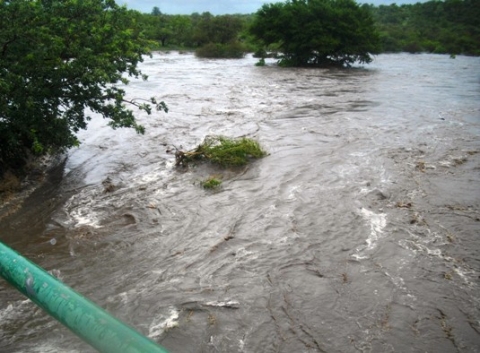 There may sometimes be too much stuff in fresh water! And too much of it. The mud of a Lowveld flood is probably more than the term "fresh water" can take.

Killer floods take with them what was on dry land next to the streams. This happens with unimaginable force, removing trees from their lifelong perches to be deposited far downstream among debris that marks such events for long; if not floating them right into the sea.

This photo was taken in January from a tall bridge of the Kruger National Park, usually high above the water level of a mostly quiet and unobtrusive river. These events are recurrent but sporadic. Not as violent as Noah’s epic, but certainly transformational of microhabitats along riverbanks and often impacting more widely.

New soil will slowly form all over the catchment area with the help of all that lives there, replacing much later that which has been yielded to the sea for enhancing marine life.