Home » HABITAT » Near or in fresh water » Nymphaea nouchali var. caerulea
Back to Category Overview
Total images in all categories: 11,793
Total number of hits on all images: 6,942,121 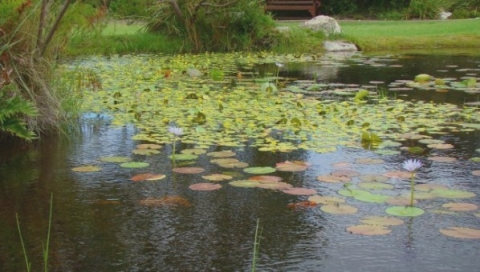 Nymphaea nouchali var. caerulea, previously N. capensis and commonly known as the blue water lily or in Afrikaans as the paddapreekstoel (frog pulpit), is an aquatic, clump-forming perennial. It grows in freshwater habitats in South Africa and widespread across Africa to Egypt, as well as elsewhere in the world.

The plant has spongy rhizomes that can survive for long periods in dry hollows such as river beds until the rains come to their rescue and they resprout. Oxygen needed by the roots is transported by specially adapted ducts from the leaves down the petioles, through to the roots.

The round, flat leaves floating on the water have long petioles rising directly from the rhizomes anchored in the mud by the roots. Leaf margins are turned up and the top surface of the leaf has a wax coating, repelling the water. Blue star-shaped flowers with many petals rise above the water on sturdy stalks throughout spring and summer, opening only in the middle part of the day.

N. nouchali var. caerulea is the same plant as the Egyptian blue lotus that was held sacred in ancient Egypt. The plant being mildly psycho-active, Egyptians in the days of the pharaohs soaked the petals in their wine or brewed a concoction that had certain desirable effects. Today's users probably prefer stronger stuff.  But growing the plant around the Nile was clearly not only for eating the rhizomes.