Home » HABITAT » Near or in fresh water » Nymphaea nouchali
Back to Category Overview
Total images in all categories: 11,793
Total number of hits on all images: 6,942,262 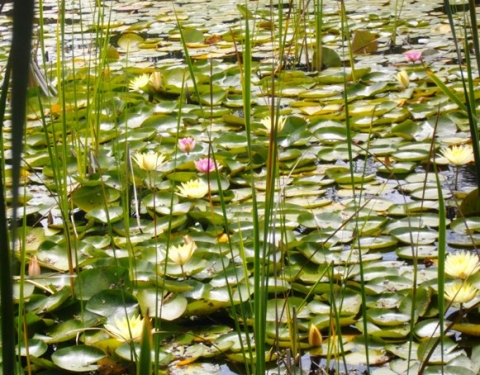 Known by many names through its long and cosmopolitan history of enjoying people's admiration, Nymphaea nouchali was revered, grown and eaten in ancient Egypt. It was first described in the 4th century BC by Theophrastus, a student of Aristotle and the first person who left writings about plants, as far as is known today.

When it became botanically recorded in modern times, the plant sample used was collected in India. Living in water probably helps to achieve wide distribution of a species, depending on its other attributes. The specific name nouchali comes from Noakhali, a district in the Chittagong Division of Bangladesh, a water rich, low elevation area; noa meaning new, khal meaning canal, referring to a long canal excavated there in the seventeenth century.

These remarkable freshwater flowers were known in ancient China, Egypt, Greece and other civilizations. Some records remain of what was observed and how the plant was used in the distant past. Apart from eating the tubers, people have used plant parts medicinally and grown the plants ornamentally.

The pink and cream colours seen here belong to one or more of the five varieties of N. nouchali that occur in Africa; not N. nouchali var. caerulea, the well-known blue flowering one.

As the origins of many of the living things on earth today are very water related, the nymphaeas belong among the older members of today’s flowering plant population on earth. Some of them have shown little change over the last 160 million years of their existence, their adaptive systems still being supported in fairly unchanged ways by their environments (Wikipedia; www.plantzafrica.com).