Home » HABITAT » Near or in fresh water » Limosella vesiculosa flowers
Back to Category Overview
Total images in all categories: 11,779
Total number of hits on all images: 6,931,804 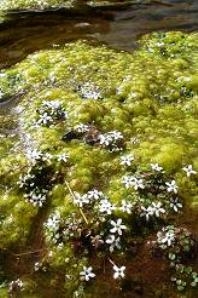 Limosella vesiculosa is said to be eaten by ice rats in the Drakensberg, Eastern Cape and Lesotho. It has pretty small white flower and occurs in the moist areas in the moutains next to rock pools. There are about 56 species of Limosella growing in parts of southern Africa.

The plant is endemic to the Drakensberg and not considered to be threatened in its habitat early in the twenty first century (www.redlist.sanbi.org).