Home » HABITAT » Near or in fresh water » Leucospermum rodolentum at Quaggaskloof Dam
Back to Category Overview
Total images in all categories: 12,068
Total number of hits on all images: 7,360,822 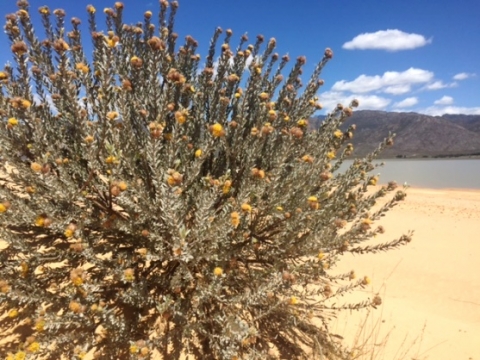 A grey pincushion growing naturally in bare sand to nearly 3 m tall and wider than tall, is not quite what one would expect from a member of this illustrious fynbos genus. Next to a man-made dam in what looks like exposed beach sand, hardship could be expected.

Many families have members that leave the clan home town for adventure or opportunity, to live in different, even trying conditions. Changed by their environment, they redefine the scope of their families.

This Leucospermum rodolentum plant was flowering in November, roughly the end of its blooming season and well past the rainy season for the region. It was hot and dry on the exposed sandy knoll, nearly free from other vegetation. Several of these plants were seen near the water, while more of them occur up on the arid fynbos and scrub slopes of surrounding hills (Manning, 2009).

(The species is described in the Leucospermum Album under genera where more photos of it have been posted.)