Home » HABITAT » Near or in fresh water » Kunene River near Epupa Falls
Back to Category Overview
Total images in all categories: 12,068
Total number of hits on all images: 7,360,817 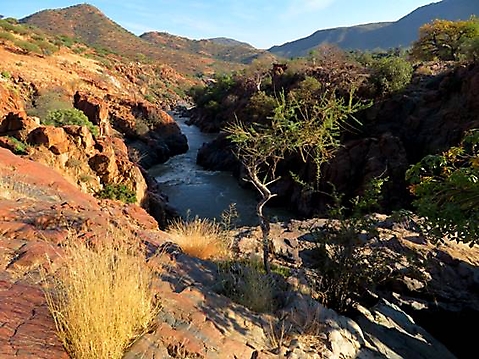 Rivers sprawl across flat land, are hemmed in by rocky gorges, change appearance and even their very nature continually en route to the sea. This happens fast and dramatic in abrupt scenes among mountains, or slowly through languorous miles across seemingly endless plains.

Whichever ways the rivers flow, they all deliver what they receive to the sea, sometimes far away, even beyond the imagination of the locals living by its banks. Over flat plains it is a smooth glide, sloping flow makes them noisy, over cliffs they drop in waterfall spectacles, while during a deluge the languid river mood switches into angry torrent that rages, laden with uprooted trees and whatever floats.

Some part of upcountry earth is almost always washed away by trickles and streams. The soil from which plants grow is carried away in millions of the smallest particles. All this is taxation for the benefit of the sea, because nature draws on a bigger canvass than any nation. Water and whatever is up for the ride are delivered by rain through river mouths and estuaries to places beyond.

Such watery proceedings leave erosion scars wherever the collective plant roots cannot hold on to their earthly assets, particularly after drought or manmade vegetation destruction. Such taxes are replaced painstakingly inland continually by soil formation, if the erosion events are not too frequent. Soil is formed by contributions from all that live and die on land, be it leaves, fruits, bark or animal hair, feather, excrement, mites and insects and eventually the full body that remains from everybody.

Notorious recent augmentation in the form of debris from the invasive human lifestyle has partly transformed land and river taxes from lifegiving nutrients to nightmares of manmade filth. Countless shapes and sizes of plastic and other, variably slow-degradable items and poisonous effluent increasingly drown the sea in everything except water.

African rivers are simultaneously similar to and different from rivers the world over, and from each other. Shared features of water accumulating under gravity are moulded in every river’s particular conditions into a unique riverine character. Straight or meandering through its unique topographical, geological and biological specifics, a river gives life, and is therefore always of interest to the living.

People picnic here, daydream here, make pacts of future shared life by exchanging rings and absorb life’s knocks and bruises by the waterside. The magnetism of water impacts on minds of all kinds, in some cases support thinking as do mountains, deserts and forests.

This means that every river commands the eyes of those that reach its banks for a while or for long. Maybe merely to assess its speed, colour, width, bank features and the life it supports; can I cross it safely, what is hidden there that I can eat, that may eat me, etc.

Or maybe, just to watch without talking; to be carried along while going nowhere, the mind on solo journey to the past, the future or only the riparian serenity of the present.