Near or in fresh water 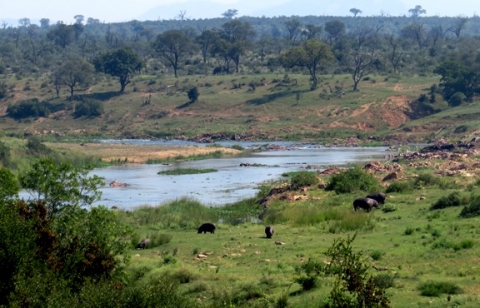 A peaceful African scene! But don’t interfere with a hippo. Do not even venture close. The hippo is not considered Africa’s most dangerous animal for nothing. Especially the males are aggressive, become territorial and prone to dealing with intruders.

Their large, curved, canine teeth are up to 50 cm long, serving no purpose in cutting or masticating grass but more than useful in the occasional fight. These teeth never stop growing although, fortunately for the animal, a brittleness sets in. Pieces of tooth break off here and there, keeping their size manageable in rather simple fashion, hippo dentistry services being what they are. Imagine how "long in the tooth" might become "out of hand" (or out of mouth rather), when a big bull approaches its life expectancy of 40 years.

There’s a story that George Washington wore dentures made of hippo teeth rather than wooden ones… another story!

Frequent yawning serves to display hippo teeth for warning enemies rather than from sleepiness; a bit like parading military capacity in Red Square, Moscow. A hippo yawn measures up to 1,2 m in width (or length; not duration), the jaws spreading to angles up to 150˚.

This understandably intimidates as effectively as a lion’s roar of 114 decibels at 1 m distance (whoever measured that maximum and paid the price in the interests of science). The distance from the yawn is a factor as well, of course, as is the direction the performing hippo happens to be facing at the time.

Hippos grazing by day is a less common sight than at night, when they’re largely invisible anyway; all to avoid sunburn. The price of suntan lotion, given the skin areas to be covered, simply prohibitive.

At night a hippo may meander up to 5 km from the water in search of grass. So, lift the tent flap occasionally during the night while camping near the river, just to check how near the end may be (Riëtte, 2016; Wikipedia).