Home » HABITAT » Near or in fresh water » Drosera capensis increasing
Back to Category Overview
Total images in all categories: 11,528
Total number of hits on all images: 6,611,564 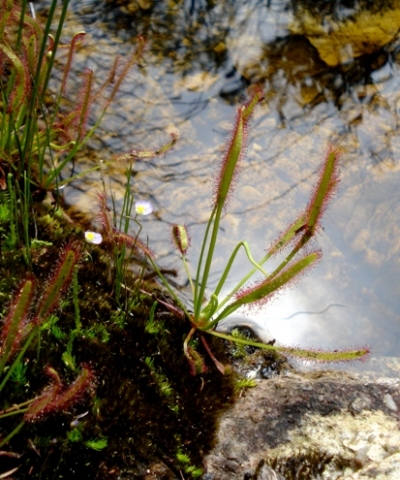 Drosera plants are often seen in damp spots, by streams and seeps, counted among the lowest growing of all the vegetation enjoying not being thirsty. These Drosera capensis plants could not have picked their spot any closer to the waterside, having much less concern about short spells of inundation than people should have when building houses in such positions.

Thigmonasty, a plant movement response to touch or vibration, usually a defensive reaction, also serves to afford movement for predatory purposes, such as the food trapping capabilities of plants in the Droseraceae family. These plants respond to being touched by insects or other invertebrates. This capability, a deliberate physical response, results in the capture and eating of diverse tiny visitors; yet another evolutionary wonder.

Such a facility is needed when the root system of a plant is incapable of supplying the necessary nutrients. Beyond serving to anchor the plant and drinking water on its behalf, Drosera roots share in the nurturing spoils of food captured by the leaves. Unable to collect the required supplies, survival came through evolving leaf features to perform the vital task.

Just imagine how many died in the false starts and dead-end attempts while everything possible was "tried" randomly until a workable solution emerged for the first Droseraceae plant, ancestor of the whole family, millions of years ago.

Why couldn't the roots just have done what "normal" plants do all the time? Diversity spreads risk. If another way can be evolved to solve a problem, it is used by something, a biological somebody with a noted identity.

Is this a better way? An irrelevant question, given the challenge to the species at the time when the odds of continuing in the same way became increasingly unfavourable. One of the many adaptive outcomes worked, changing life for a species. Later to become a genus; and still later, a family.

A bit like the statement about philosophy: There is no idea so ridiculous that it will not be espoused by somebody. Philosophy, seeking answers to how the world works and what it might all mean, could have been expected to converge, finding "the" right answer and be done with it. Instead, it diverges! Diversifying in pursuit of the nature of the living world that shaped human intelligence, one small part of the overall thing, life on earth (KZN Wildlife Rhino Club Newsletter, Oct. 2010).

There is more about Drosera on this Site.  Enter the name in the Search Box for access.