Home » HABITAT » Near or in fresh water » Birds on a floating river isle
Back to Category Overview
Total images in all categories: 11,528
Total number of hits on all images: 6,611,475

Birds on a floating river isle 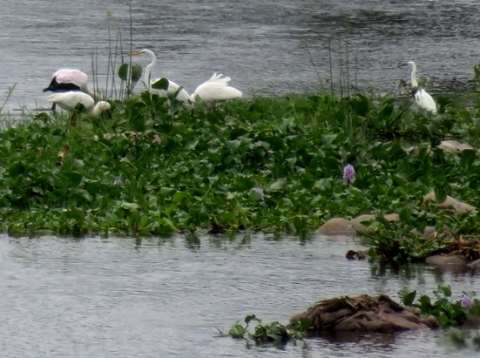 Previous
Image 7 of 74
Next

These water birds don't mind the flimsiness of the underfoot support. They can fly after all and swim in a crisis. The perch serves to deliver food to their various tastes as a good restaurant does.

An erect, pale blue inflorescence of the water hyacinth, Eichhornia crassipes, is visible among the greenery of its leaves floating freely in the river water.

The flowers grow in a single spike of eight to fifteen flowers in the broad, short, cylindrical shape. The six obtusely pointed petals of the flower are pale lavender or blue to pink. In their natural South American habitat the pollination is performed by long-tongued bees.

Should the pollination not go well in a newly invaded area of this vigorous coloniser, vegetative propagation by cloning does the rest. It helps to be one of the fastest growing plant species known. Plant parts break off easily, continuing on their own and making their presence felt in watery environments. E. crassipes is more than an ordinary nuisance in African rivers and lakes (http://plants.ifas.ufl.edu; Wikipedia).