Home » HABITAT » Near or in fresh water » Augrabies
Back to Category Overview
Total images in all categories: 11,528
Total number of hits on all images: 6,611,320 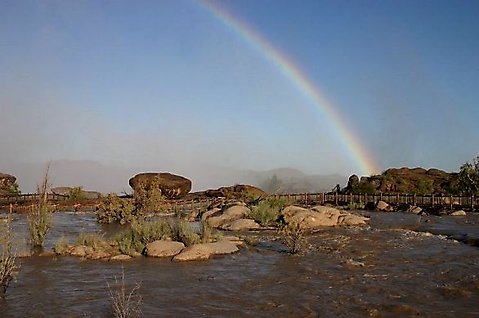 Previous
Image 4 of 74
Next

The appeal of the Augrabies Falls National Park is enhanced when the Gariep or Orange River (which is brown) is in flood. The Augrabies name is derived from a Khoi word meaning place of great noise.

The rocks on the flanks of the gorge lose recently accumulated accessories, including plants, whenever the big floods return after periods of drought and low river levels. Photographer perches along the 18 km gorge allow recording of one of nature’s most explosive spectacles.

The recurring riparian catharsis caused by rain hundreds of kilometres upstream growls as reminder of a long-slumbering, superior force that returns unannounced. The otherwise serenely quiet landscape has to be understood in terms of its rare excesses as well.

Arriving gradually or instantly, once here full attention from all observers translates into special care or foolish disaster. Come too close at your peril. The enormous force unleashed by the momentum of the watery mass and what it carries along inspires awe.

The flood surges noisily through the arid land, locally rainless while the big waters pass through with no cloud in sight. A rainbow may indicate otherwise, that both kinds of watery blessings have arrived simultaneously. Tiny drops escape, however, continually into the air from the flooding river. When the sun is behind the observer, rainbows may be conjured, even when there is no chance of rain locally.

This conduit country presents the contrast of flooding or trickling river, desiccating drought amidst masses of water, months or metres apart.

Sporadically bearing witness to the epic transportation of the miracle liquid, parched plants just a few metres above the banks would plead and lament, had they the voices to do so. Notable among them, the solitary quiver trees are dotted around near the River like lonely sentinels on the rocky outcrops. They tell of significant but minimalistic life among the koppies, always partly concealed. The unseen survive better here.

The memorable sights of the flood unfold before all eyes over days. Sometimes many of them, days and eyes. The indigenous animal population is always among the transfixed onlookers but the occasion does bring people from near and far to Augrabies. They stand in awe, gawking at nature’s reminder of its powers and paradoxes (www.places.co.za).