Home » HABITAT » Habitat diversity » Fossil tree chunks
Back to Category Overview
Total images in all categories: 11,411
Total number of hits on all images: 6,178,568 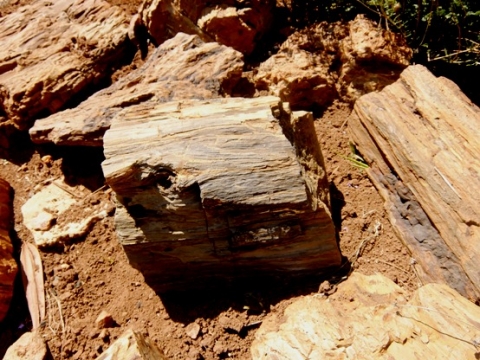 Fossilised tree trunks remind of the days before people. Fossilised human remains, even of human settlements or city debris will be interesting discoveries in the days to come when theories may be formed about the nature of the long-lost humanity, what they may have been up to and even whether there ever had been such a species. Creationism may even recur among super-insects, academic mushrooms or colonists from space.

The extremely hard evidence presented by bits of fossil trees, sometimes preserved in petrified forests or as upright fossils, exist in many places on earth. They were typically formed during periods of rapid sedimentation followed by long periods of slow or no adding of sediment.

The fast phase typically occurs when a coastal plain or rift basin actively subsides, or from sudden accumulation of volcanic material. The slow phase may last some decades or for thousands of years. As we know, calamity strikes once and totally or in instalments; life continuing happily or sadly until the final chapter.

Some of the larger, taller tree fossils have even regrown after partial burial, forming new roots once or several times, just below newly formed, higher surfaces. Such trees become so-called polystrate fossils. Life simply goes on at a higher level, the tree fed by the foliage protruding above the raised level(s) of the ground.

The process of petrification of the wood happens underground, the trunk buried and preserved under volcanic ash, decomposition retarded or stopped for a time by the absence of oxygen that would allow aerobic decomposition and total disappearance.

All of the wood is then over time replaced by minerals during slow decomposition. These minerals are often silicate or quartz; the process called permineralisation. The slow, bit-by-bit process allows the wood structure, the stem tissue to be retained in its three-dimensional form, its substance gradually replaced in total by minerals that last as rock, as a tree fossil.

Unknown in many parts of the world, fossil trees are likely to be found in regions where climatic conditions were conducive to their formation at particular times long ago.

There is a Petrified Forest National Park in Arizona in the USA covering about 346 square miles of grassy land at high altitude. Many tourists go there to see the large deposits of exposed, petrified trees lying about in a semi-desert, shrub steppe habitat.

The trees lived here in the Late Triassic period, about 225 million years ago. Today a dry climate at high altitude prone to temperature extremes characterises this land. The annual rainfall is about 250 mm, while high winds and dust storms are common (Wikipedia).