Home » HABITAT » Forests » Spiders also live in forests
Back to Category Overview
Total images in all categories: 10,164
Total number of hits on all images: 4,829,250 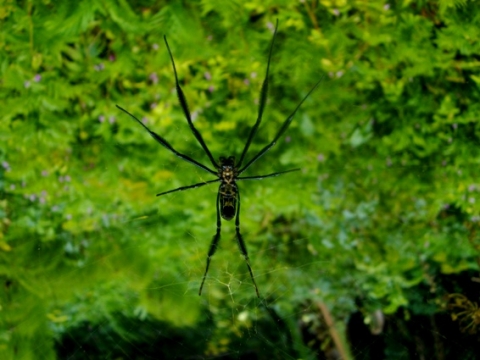 And what is a day in the forest without encountering a big black spider on its web over the path one follows? Better it sits on one’s shoulder after the collision than in the face.

Birdsong is interrupted by unearthly sounds from the surprised or frightened victim for a short while. Does the unfamiliar noise herald a new food source lying on the ground? Some eyes will come looking.

And the web may need serious reconstruction, should the spider be well enough after the rude interruption of its vigil. All will happen as it should in good time: The take of some who studied philosophy.

Much better for the alien stroller to remain vigilant, minimise interference in forest life… and take the photo.