Home » HABITAT » Forests » Secamone alpini, bobbejaantou
Back to Category Overview
Total images in all categories: 10,164
Total number of hits on all images: 4,829,279 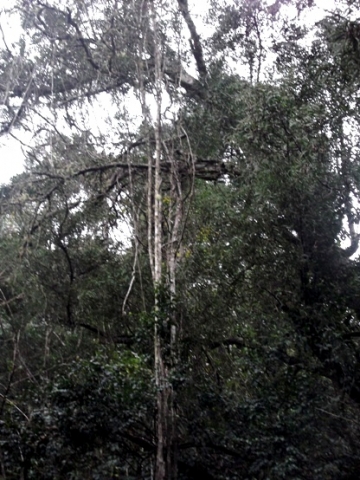 The robust, woody stems of Secamone alpini, a forest creeper, are often observed in the forest shade bare and brown, when the plant’s leaves are high and out of sight, part of the canopy above. The plant's common name of bobbejaantou is shared with other twining and climbing plants, notably the white-flowered, coastal Cynanchum africanum. That is the plant associated with bobbejaantou poisoning of horses, when grass becomes scarce and horses might sample the wrong leafy option.

There is, of course, the ultimate bobbejaantou man, Tarzan of the Apes, who grew up as a feral child in the untamed African forests, taught tree tricks by the great apes of the Mangani tribe. This fictional character, created by Edgar Rice Burroughs, moved at great speed through the forest, swinging high from available hanging vines.

S. alpini commonly grows in central Africa among the trees. It would have been an appropriate favourite, meriting Tarzan’s trust when making split-second decisions about changing ropes on his journeys, deep in the tropical forests. Every liana would have to carry his weight and be of the right length to position him safely upon the next branch, agility at a premium. Always conveniently close to another available forest rope for his next move.

The slightest calculation error would have caused disaster for the Tarzan film hero, Johnny Weissmuller, who learnt proper rope swinging only after swimming in the Olympics. Let alone the havoc that could be caused on the film set, if Johnny had landed on a movie camera among the crew.

Maybe Viscount Greystoke, Tarzan’s persona for the civilised world, was no amateur botanist and only assessed the thickness of lianas, not their species and hoping about strength. Go check your Tarzan comic books, if they are still around (Wikipedia).