Home » HABITAT » Forests » Schefflera umbellifera branching stem
Back to Category Overview
Total images in all categories: 10,164
Total number of hits on all images: 4,829,202 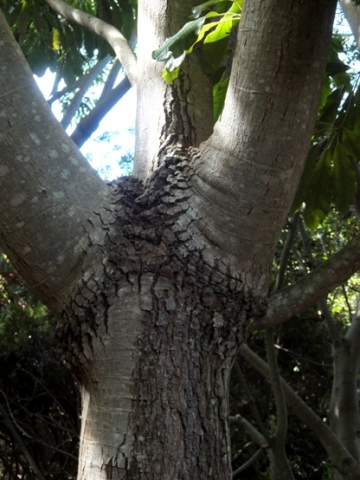 The trunk of Schefflera umbellifera has grey-brown bark that is initially smooth and covered in raised, corky lenticels. Later on there is longitudinal fissuring causing roughness, starting around the forks with side branches as in the photo. The roughness is enhanced on old lower stems. A trunk becomes 60 cm in diameter. The branches are brittle, the wood white and soft.

Bark and leaves are used in traditional healing.

The seed is hard to germinate. They normally grow after passing through the digestive system of some animal or bird. It would thus be easier to transplant seedlings, provided one can find them and knows what they look like, as seedlings have simple leaves, mature trees compound ones (Coates Palgrave, 2002; Pooley, 1993).