Home » HABITAT » Forests » Rainbow over the forest
Back to Category Overview
Total images in all categories: 10,349
Total number of hits on all images: 5,048,985

Rainbow over the forest 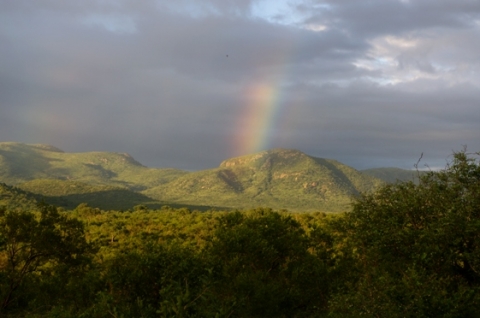 Early humanity fought nature to survive. And what a heroic battle that was! Carrying on the fight for countless generations during the ensuing peace, survival no longer so much challenged, we do it for the remote eventuality on an imagined day and because we can. We do what every living species on earth still does every day at full tilt, and more. There are also more of us doing everything.

Humanity today owns an excessive accumulation of super-effective technologies inherited from countless ingenious ancestors. The hyper-successful human brain has brought too many victories for our own good. This human heritage of invention today offers enormous scope, but insufficient limits for dealing with its impact. The unforeseen consequences have become vast. The victory over nature is truly a hollow one.

No generation before ours has ever seen fit to call a truce with nature. Now the penny has dropped: There are fatal aches in devastated forests, seas swallowing plastic, ugly poisons in polluted rivers, air not worth breathing and soils failing crops. There is climate change, topsoil streaming to the sea and biodiversity bleeding out... amidst a glut of people.

The peace talks are slow as the good life numbs the brain. The global human response is lethargic albeit that the signals are alarming. The skies are watched nervously, but the pretty spots on earth soothe the decision makers, offering false assurances. And so many "others" are responsible after all, not us. To many it’s still all alarmist stuff, no worries! Listen to the funnies going on!

Nature has time on its side. Almost an eternity to retaliate and rebuild; if need be after people. And more new stuff (read species) to come, long after people. For nature is integrated life, generating species as it goes. All the living together forge ahead inexorably by exploring every possibility to let something more, something new live somewhere, in a new way, anywhere and everywhere.

All the living things use each other without a pardon me. All strive to survive with available might until procreation, no exceptions. All of them stepping stones or food for each other, a scramble, a rush, rampant life. Get in the way and you will be used, deemed to be on the path or the path itself, a convenience, a sacrifice for another life coming into form.

People are in this mix also. Not so much as one might think used by their pets as servants, but as hosts by the millions of micro-organisms living in the human body. Walk or sit as you like, those inside you don't care what their hotel is doing.

Few things on earth today underestimate people anymore, their inept young taking so long to grow up, a targeted food much too well guarded, now largely out of reach.

Every species is relevant for a period in the surge, the collective dance of all species. Each soon becomes irrelevant, as last season's leaf that fell. The species much longer than its individual entities, of course, but in the end entities and species all share the same fate. A species might at times last long in one successful shape, before moving on in a changed shape as circumstances change and dictate. Or one species might multiply into several new shapes, as many as can make it in the fray of becoming something viable in the moment, for some time.

So it is for the camel, the amoeba, the baobab and the human, each serving its purpose in a shorter or longer, always finite trajectory. A contribution of one heartbeat of the all-inclusive collective "thing", the super-organism of which all living things on earth form part. It is this continuous life phenomenon that replaces itself in organisms and species, surging, writhing and transforming itself full of energy and the courage to live in every way it can. Willing life and inculcating this will into every component, every species and organism. Its complex being grows while attending to countless details, more than any one species, even the conceited humanity, could ever imagine.

Every constituent species, whether it may live for millions of years or a relatively short moment in time, would have difficulty in recognising its own future forms, its own long term offspring, in their later transformed state or states. Not better or worse, merely meeting living requirements of a later age; shaped by a different environment, aided by whatever lives can be used at the time in whatever way, as nature taught them, wrought them.

Where is it all going? What is its meaning? We're here for only part of the ride, entertained for a while. We were never shown the itinerary and shall never be. While we're here, we shall certainly peep out of some of the windows though! We got this brain, eyes and curiosity, you see! But our species will be dropped off at an unmarked station long before the ride ends.

Begging bowl in hand, humanity may soon try a new tack: a new more respectful attitude to nature, like a remorseful kid in trouble. Really our mother after all, as the hollow saying goes?

We may well beg nature, because she’s pretty and we’re losing her. And she may be losing us, without batting an eye, because nature is not about us. We're an incidental part of her.