Home » HABITAT » Forests » The African fish eagle is landing
Back to Category Overview
Total images in all categories: 10,164
Total number of hits on all images: 4,829,278

The African fish eagle is landing 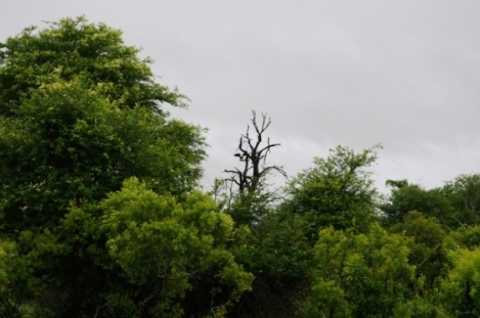 The first forests on earth were eerie, scary places. In the beginning there was nothing present in the forests that could become scared! Nothing with eyes and ears, a palpitating heart capable of taking fright was moving here yet.

Utterly lonely places, those early forests without birds, insects or mammals… nobody even to feel lonely! When the conifers came, there were still no bird or animal sounds. Just faint hissing and swishing of needles and fronds in wild winds. Woody trees brought creaking and knocking sounds on the wind through the deep shade and nocturnal darkness, an arhythmical forest percussion music that kept the earliest animal listeners vigilant on dark nights, straining all of their evolved sensory endowment to identify approaching danger.

Mystified by strange forest sounds and inspired by their own anxiety, early people imagined mythical forest beings and fantasised about their doings. Over countless generations, myths moulded from anecdotes, superstitions perpetuated from projected fear and a rich forest folklore were honed into many analogous shapes in cultures across the continents.

What bubbled to the surface relating to tree and forest archetypes from recesses of the subconscious became important human ties to nature. Both the conscious understanding and the subconscious internalisation shaping the psyche brought appreciation of nature in general and forest in particular. These things are vital parts of the human heritage of the spirit that still evolve as living entities, making people what they are. Distance from nature as in impoverished city living and destruction of nature and forest are irreparable losses to humanity.

The call and sighting of the African fish eagle became familiar in African forests near lakes and rivers very long ago. So did the voice and face of the north American bald eagle on its continent, a fair resemblance between the two related birds. The national bird of Namibia, Zimbabwe, Zambia and South Sudan, the African fish eagle has been warming the hearts of people throughout Sub-Saharan Africa since times immemorial.

In the context of the history of the earth, all 4,5 thousand million years of it, human memory counts for very little though. Including all extinct species of the genus Homo, humanoid history spans about 2 million years. Excluding the Neanderthals, the time-span of Homo sapiens on earth is not too far from 200 000 years; a notably late arrival, battling to make sense of the past, the present and the future.

Before recording became such a predominant human habit, or even a compulsion due to its importance in enabling of the masses and the facilitation of knowledge growth, memory of specific events and facts typically lasted only for three or four generations. After that the warping, blurring and forgetting of material transmitted by word of mouth, enhanced by intermittent upheaval in human society from war, epidemic disease, migration and more, mostly took over to bury information.

Then, of course, historians would arrive as part of the descriptive, record keeping or documentational culture of human society to reconstruct all that was from residual information; each according to his or her culture, ethics, training, resources, personal nature and convictions (Bryson, 2005; Collis, 1950; Wikipedia).