Home » HABITAT » Forests » Your forest, not that of your ancestors
Back to Category Overview
Total images in all categories: 10,164
Total number of hits on all images: 4,829,235

Your forest, not that of your ancestors 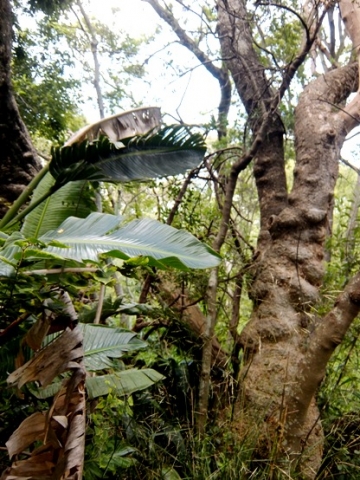 Where on earth is a forest still untouched by man? If no person has ever been in a specific spot, still the animals that used to eat and defecate there visit less frequently, having been decimated by people. The air is warmer, the rainfall affected and some unwanted chemicals have been added to air and water just about everywhere. Globally human living habits have changed the vegetation and animals of the planet.

A forest is the result of all the living that has happened in and around it over a long time. Your grandfather's forest is gone and your grandchildren's one not yet determined or certain. They'll probably have smaller, more miserable ones. Not the one you enjoy now... the situation is sliding.

Transforming the world through conscious decisions because we can and through ignorance or neglect because we don’t know or don’t care, are the privileges of all participating species on earth. Every amoeba and every insect change something, as did the first human that stepped on a branch and every elephant that breaks a tree today.

The impact of a species on its environment reduces once its living conditions become unfavourable, its numbers dwindling. Most other species find themselves in some part of a downward spiral, the significant impact on their wellbeing comes from people.

Humanity survives well by using its critical evolutionary attribute, its brain to solve problems, to satisfy whims and to fashion improvements. The human brain is proven to be the most devastating coping attribute of all species, ever. Its impact is continually multiplied by the tools and systems it creates at exponential rate. People believe their own superiority, rarely doubting their command of the situation. The can-do culture transforms the earth into a backyard for humans.

No surprise, given the wonderful track record of overcoming obstacles. Humanity has also destroyed most. Technology is more than a trend today, it's a tsunami favouring people over all the other species combined. We live well at the expense of all other species.

For now all is good, although there are a few worrying signs appearing. Some egg-heads say we're overusing resources. Some escalation in weather conditions, ice disappearing where it "always" used to be, snow appearing in the wrong places cause concern. The jury stays out, however, continuing to debate as we, the people, have so many views and opinions, the fake news proliferating.

Awareness of the human brain’s inordinate successes over a million years or so, has recently taught brains collectively to start limiting their victories. Survival now requires moderation to conserve resources. Every action creates its own reaction and we're kind of clever, after all, learning as we go.

The rest of all living species might admit defeat and plead for mercy if it had such capabilities. Even if we're not gracious in showing compassion to the vanquished, we're learning that we need a world of plants, animals, insects and microbes purely for our own sake. Although still selfish, managing our impact on nature wisely is becoming a priority to thinking people.

Now to get more of them thinking! This habit is grown through teaching, living at lower consumption levels and planting or protecting what appears on Red Lists of endangered, vulnerable and rare species. Laws help but loopholes in them are attractive challenges to antisocial, greedy or reckless brains in the mix of seven billion plus, focused merely on figuring increases in own comfort and enjoyment.

The brain has the capacity to do better in these matters. The will might last and build the discipline. The good life can be retained by moderation and caring for, sharing with all else that lives on earth. We have acquired the value of respecting the neighbours. Well, all the species are our neighbours!