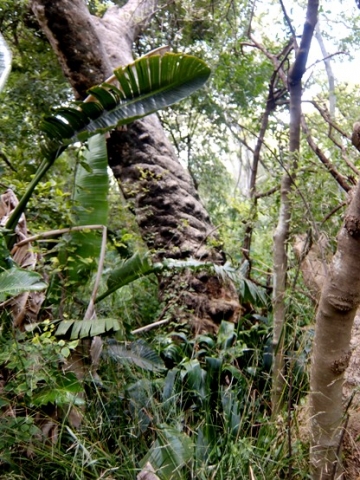 Forests reside deeply among the archetypes of the human psyche, embedded there from the times of primitive ancestors finding shelter deep in forests.

Caves were rare in ancient times as today, only available to the richer cavemen as numbers grew. Wealth was then counted in the muscle and courage of tribesmen. The weak and slow took shelter further away from the prized real estate of nature, responding to attacks from everything hungry as best they could. Attackers sometimes included their fellow men, bent on reducing the numbers competing for food and women, if not on eating the conquered.

Compelled to moving further away, survival was enhanced firstly by a quick eye for suitable shelter for the night. Secondly, by finding somewhere to stay until supplies, mainly food and water ran out; or until competitors arrived that made flight preferable to fight.

Fight was the key to upwards social mobility. Moving on was the strategy of the weak and consequently poor man. Often the resourceful man not succumbing to victim status. It worked! The earth filled up with specimens moving away from those dominant in their species. Every surviving splinter group formed a new tribe with its own strong members, occupying new territory. Spreading over the face of the earth took thousands of years. During this time there was always enough for all in the species, for those that missed out died, replaced by later, luckier or stronger representatives of their race.

Parts of the earth found unoccupied by a species today only shows inability, not lack of effort; life in every form extends to the extreme limits of viable ecology. Only brains, a special case of the phenomenon of life, sometimes brings caution, declaring a border.

Consuming resources faster than they were naturally replenished was unthinkable when the earth was big and unknown in the minds of men. When humanity invented mass production during the Industrial Revolution, facilitating mass reproduction, the road was paved to the global village for people on earth, a place so unfriendly to other species.

Little forest patches are re-invented today as curiosities for city dwellers to appreciate a glimpse of the world of their ancestors. Progress has come so far that the skills required for achieving this takes years to master: One needs a PhD in accommodating zoo animals, cooped according to species, to appear comfortable; and the planted vegetation to suggest natural diversity.