Home » HABITAT » Habitat diversity » What changes next?
Back to Category Overview
Total images in all categories: 12,058
Total number of hits on all images: 7,353,533 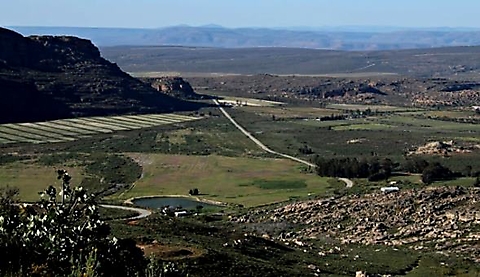 The lowland plants are more threatened than those on the hills. Human activities impact most where the deeper soils, rock-free patches and water availability favour agriculture and settlement. Plants evenly distributed from mountain top to valley are not too badly threatened by this tendency. Unfortunately, they are fewer than those favouring habitat niches at particular elevations.

A few centuries of both stock and crop farming and some other activities have brought many of the Cape Floristic Region plant species under threat. More than two thirds of all threatened plant species in South Africa reside in the Western Cape. In number terms this translated to 1900 species by 2020.

Ploughing and planting, grazing, browsing, trampling and burning of vegetation (and overdoing all of these) by few selective feeders rather than the diverse natural game species, are not the only causes. Irrigation and other water use, damming and pollution of watercourses, extensive use of herbicides and insecticides, soil improvement for monoculture crops, fragmentation of reducing patches of conserved veld and the introduction of alien vegetation have compounded the effects.

The nature of today’s renosterveld during the eighteenth century is a matter of debate and dispute. It may either have been grassy shrubveld or shrubby grassveld. Gradual transformation over a long time has now changed it irrevocably and it is still changing: naturally becoming succulent Karoo in low rainfall parts and shale or granite fynbos where the rainfall is high, if not turned into features of increased human settlement (Curtis-Scott, et al, 2020).