Home » HABITAT » Habitat diversity » Dead wood
Back to Category Overview
Total images in all categories: 11,894
Total number of hits on all images: 7,134,939 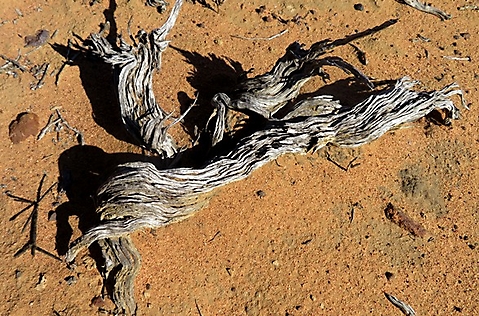 Dry wood is often the plant component remaining visible on earth longest after death of the organism. Bone is the animal equivalent, under most conditions the most durable animal component.

Decomposition of organic material is often fast on soft tissue, slower on the hard parts. A multiplicity of several concurrent processes contributes in wood decomposition, including microbial activity and tunnelling by invertebrates that eat their way through dead wood, more so on the warmer land parts on earth.

Living organisms, all bent on satisfying hunger and maintaining their bodies, are endowed internally with many kinds of enzymes for catalysing biochemical reactions that separate nutritive components, eliminating the non-nutritive parts. Wood-boring beetles (Coleoptera) and termites, particularly the fungus-farming varieties, are key players in the consumption of wood. In temperate forests ants and fungi participate in a big way.

Wood decomposition entails transformation of cellulose, particularly woody cell walls into smaller bits, eventually mineralising and recycling them into the environment as inorganic matter. The wood is simultaneously infiltrated by fungi and other microbes that gradually degrade and turn it into the humus component of soil.

Bark may be attacked first by phloem-feeding species drilling holes into and through the outer layer on dead trees that may still be standing. This opens the door for foragers of many kinds and soon or not so soon, the dead tree is gone.

And then there is the opposite phenomenon: the fossilisation of organic matter in a preserved form, often wood or bone, but also leaves and even footprints on the ground.

This is a very natural phenomenon, similar to the artificial human habit of mummification. Equivalent human habits of burial, cremation, feeding of vultures and organ donation only differ in the speed of recycling molecules.

The preservation of organic matter is enhanced under oxygen deficiency as may be achieved in fast burial of bodies, rapid desiccation, high saline conditions and sub-zero temperatures. Fossil remains of living entities are preserved in rock for thousands and millions of years by minerals replacing the constituent woody, bony or certain other parts.

Slow natural transformation into stone gives us fossil trees from way-back-when. Discovering dinosaur bones brings people fame for their luck, their fortitude or their sagacity; these three are sometimes confused. It also provides science with opportunities for furthering discovery and enhancing historical frameworks.

The amount of actual preservation is the same whether in free molecular or in (partial) fossil form. The big and visible relics do, however, excite the scientists and some other people for the glimpses they offer into the past.

Somewhere between quick and slow demise, most organic remains linger on earth with a parting odour for a variable period while inexorably decomposing, whether we polish the wood or weep over the bones (Ulyshen, 2016: Wood decomposition as influenced by invertebrates. Biological reviews of the Cambridge Philosophical Society, 91(1):70-85; Wikipedia).