Home » HABITAT » Habitat diversity » A dassie sunning itself
Back to Category Overview
Total images in all categories: 11,921
Total number of hits on all images: 7,169,067

A dassie sunning itself 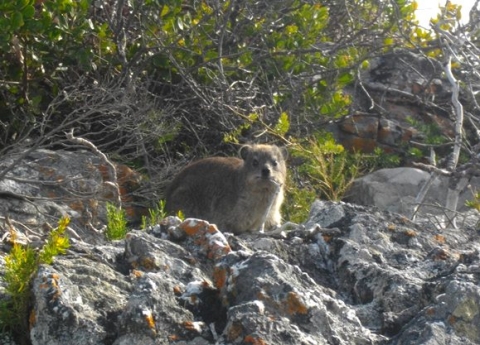 As living space for mammals becomes increasingly occupied by people, most extant animal species are reduced to reserves, game parks and zoos. Or they are extinct, remembered from books and pictures.

People would like to believe all species are being preserved by someone else, somewhere else, not costing them money or causing them worry. The human value system provides for animal care and the prevention of cruelty to animals. Where land is occupied by people though, the animal's habitat is reduced to confined spaces as they should not inconvenience the single rule-making species on earth.

The main factors determining whether an animal will disappear from the general scene or not include: physical size of the species, its potential risk to people and property, its commercial use while kept under control, its feeding and other living requirements and whether it has been tamed as a pet or not. Most animals have thus ended up in gaol, particularly the larger and "dangerous" ones; eradicated from all the open land claimed by people.

The hyrax or dassie is in South Africa one of the remaining fortunate mammals living in the veld even near towns; conditions and requirements applying. A relic from the distant past when all creatures wandered where they wanted, they dassie today brings joy to hikers that spot them where few wild animals are still expected, apart from the rat and mouse.

The flying ones are liked better and allowed readily, as people don't fly that well yet. Exceptions include bats that many people find scary but they fortunately operate at night and tend to become forgotten by urban people. Then there are the birds interfering with aeroplanes for which they are made to pay and the distribution of electricity that causes bird deaths.

The reasons the dassie is allowed to stay include: They don’t eat much that people can use or sell. They prefer to live in the smaller rock cavities unsuitable for people, even during their cave-dwelling days. They don’t invade people’s domestic territory. And dassies will not harm the children playing in the veld. So, where people don’t hunt them to extinction as food, they tend to persist or even return.

The case for the chacma baboon is not that strong. Its future in nature, living freely in the South African countryside is not that rosy, because: It has longer teeth than a leopard and can do serious harm to a person. It eats much of what people eat and it damages property. Controlling it costs money. People eat baboons.

On the other hand, baboons are clever, adaptable and resourceful. They don't stick to one domestic hole in a rock like a dassie and migrate in search of food within the limits imposed by people's land usage patterns. They are omnivores, capitalising on varied and seasonal opportunities, as well as on developed foraging skills. They care actively for their young and have social structures related to troop defence. At least some farmers accept the maize ears or cobs taken from the field as a nature tax.

Back to the dassies: People spend so much time indoors and are so preoccupied with own doings and hurried lives that dassies feel safe enough to accept people as neighbours (and vice versa) in many parts of the country (albeit at many dassie arm-lengths).

The good feeling of having an innocuous neighbour from nature usually encourages people to restrain their dogs from venting half-forgotten hunting instincts and killing the last dassie around the town.