Home » HABITAT » Habitat diversity » Damhoek, a place for reflection
Back to Category Overview
Total images in all categories: 11,411
Total number of hits on all images: 6,181,644

Damhoek, a place for reflection 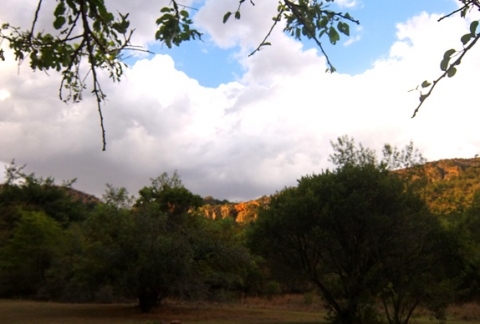 Long ago the bush was an enemy, even the enemy. Wild animals that eat people, insects and snakes that bite and other dangers lurked there. Augmented by folklore, these things brought apprehension into the brains behind the eyes that looked at the wild. Clearings in the bush were victories over nature, as a much smaller human population sought security and the prospects for their children.

Over time the human brain proved a formidable resource for safeguarding and building the fortune of mankind. This allowed people to breed prodigiously, to the extent that protecting the future of their children now brings the opposite challenge: Safeguard the remainder of nature by procreating less, or else!

Nature conservation is a tall order for several reasons:

1. Climate change has only been on the cards as a looming possibility since the Industrial Revolution. Understanding its impact arrived together with overpopulation from mass production. Thinking time for solving this problem is very little, maybe too little.

2. The economic system of our time requires continual growth, a value proving hard, possibly too hard to relinquish.

4. The competitiveness among nations cannot allow population control to be implemented unilaterally. The neighbours will swamp those that don’t breed competitively.

5. While thinking happens in individual brains only, decision making regarding this kind of problem requires large group participation, eventually global programmes. The thinking capacity is there. But trust relationships for viable solutions at global level may prove to be the bridge too far for humanity.

These are some of the survival challenges for the human brain in the twenty first century. On all counts it appears unlikely that they will be met in time. All the choices will bring hardship, while only some favour survival. By the end of this century there may still not be wide recognition of the problem, let alone any grand schemes.

Mankind has overcome many obstacles in the past and achieved many wondrous things. Hope is still a risk that must be run. The brains in a significant proportion of more than seven billion people are still addressing some of the bigger issues of the day.